by RE
in Human History, IA, Pyramids, World Truth
0

While many questions remain unanswered about the Great Pyramid of Giza, we still remain perplexed by the complexity and precision of this incredible ancient structure.

Researchers have yet to answer numerous enigmas about the Great Pyramid, enigmas that prevent us from solving the puzzle surrounding this mysterious antique construction that has baffled researchers, historians, and tourists alike. Interestingly, the great pyramid is the only remaining structure of the 7 wonders of the ancient world.

It remains a profound mystery the fact that the Great Pyramid of Giza was built with such precision, how people managed to quarry and transport huge blocks of stone and incorporate them creating the pyramid is a mystery that no one has been able to properly explain. The fact that The Great Pyramid is the most accurately aligned structure in existence and faces true north with only 3/60th of a degree of error is something mind-boggling. 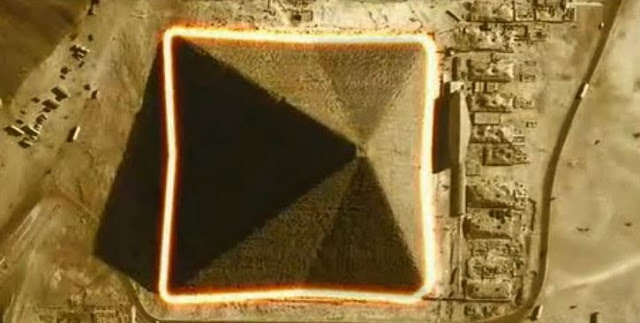 Not only is the Great Pyramid one of the most accurately aligned structures on Earth, there are numerous other details about it that are even more incredible.

In this article, we go through twenty points about the Great Pyramid which are the ultimate evidence that this incredible ancient structure was built by an ancient civilization that was far more advanced than what mainstream scholars are willing to admit.

The Great Pyramid of Giza, a monument like no other

The numeric value of 144,000: A key role in the Building process of the Pyramid

It’s fascinating to read about the numerous details and studies on the Great Pyramid of Giza, but there are many ‘unknown’ details about the Pyramid that are not mentioned in history books and schools, these points are indicative of a far more advanced civilization which participated in the planning and construction of the great Pyramid, evidence of that are the numerous complex mathematical formulas incorporated and used in the construction. Interestingly, the outer mantle was composed of 144,000 casing stones, all of them highly polished and flat to an accuracy of 1/100th of an inch, about 100 inches thick and weighing approx. 15 tons each. It is believed that the numeric value of 144,000 plays a key role in the harmonic connection that eventually determined the exact size of the structure. ( source ) ( source )

The Great Pyramid of Giza is the most accurately aligned structure in existence and faces true north with only 3/60th of a degree of error. The position of the North Pole moves over time and the pyramid was exactly aligned at one time. Furthermore, the Great Pyramid is located at the center of the land mass of the earth. The east/west parallel that crosses the most land and the north/south meridian that crosses the most land intersect in two places on the earth, one in the ocean and the other at the Great Pyramid.

The only 8-sided Pyramid in Egypt

This is a fact unknown to many people. The Great Pyramid of Giza is the only Pyramid discovered to date which in fact has eight sides. The four faces of the pyramid are slightly concave, the only pyramid to have been built this way.

The centers of the four sides are indented with an extraordinary degree of precision forming the only 8 sided pyramid, this effect is not visible from the ground or from a distance but only from the air, and then only under the proper lighting conditions. This phenomenon is only detectable from the air at dawn and sunset on the spring and autumn equinoxes, when the sun casts shadows on the pyramid. (Check out the above image)

The Value of Pi represented in the Great Pyramid

While many believe there is a direct correlation between the constellation of Orion and the Pyramids at the Giza plateau, many people are unaware of the fact that the Descending Passage of the Great Pyramid pointed to the pole star Alpha Draconis, circa 2170-2144 BCE. This was the North Star at that point in time. No other star has aligned with the passage since then.

Orion and The Great Pyramid

The southern shaft in the King’s Chamber pointed to the star Al Nitak (Zeta Orionis) in the constellation Orion, circa 2450 BCE. The Orion constellation was associated with the Egyptian god Osiris. No other star aligned with this shaft during that time in history.

The Sun, math and the Great Pyramid

The Great Pyramid and planet Earth

The curvature designed into the faces of the pyramid exactly matches the radius of the earth. ( source ) ( source )

When it was first entered by the Arabs in 820 AD, the only thing found in the pyramid was an empty granite box in the King’s chamber called the “coffer”. ( source )

Built in harmony with the galaxy

According to reports, on midnight of the autumnal equinox in the year when the builder of the Great Pyramid finished its construction process, a line extending from the apex pointed to the star Alcyone.

Alcyone is the brightest star in the Pleiades open cluster, which is a young cluster, aged at less than 50 million years. It is located approximately 400 light years from Earth. ( source )

The Ark of the Covenant and the Great Pyramid of Giza

A detail that was unknown to me until not long ago is that the volume or cubic capacity of the Coffer in the King’s chamber is exactly the same volume to the Ark of the Covenant as described in the Bible. Interestingly, The granite coffer in the “King’s Chamber” is too big to fit through the passages and so it must have been put in place during construction.

The mysterious coffin in the Great Pyramid

If the great coffin wasn’t meant to house the remains of a Pharaoh, then what was its real purpose? The coffer was made out of a block of solid granite. This would have required bronze saws 8-9 ft. long set with teeth of sapphires. Hollowing out of the interior would require tubular drills of the same material applied with a tremendous vertical force. Microscopic analysis of the coffer reveals that it was made with a fixed point drill that used hard jewel bits and a drilling force of 2 tons.