by RE
in Health, World Truth
0

by Power of Positivity

Paradoxically, Americans are becoming both more obese and nutrient deficient at the same time. Obese children eating processed foods are nutrient depleted and increasingly get scurvy and rickets, diseases we thought we left behind in the 19th and 20th centuries. – Mark Hyman, M.D.

The “food industrial complex” may be amongst the most corrupt markets in the world – and, for the most, part, they get away with it.

Here’s a harsh reality: most people have no idea what they’re eating. Need proof? In a poll taken by the Organic Consumers Association, 75 percent of Americans didn’t know they were eating genetically engineered foods.

Just 29 percent of people say they “trust the FDA (Food and Drug Administration)” according to the same study. 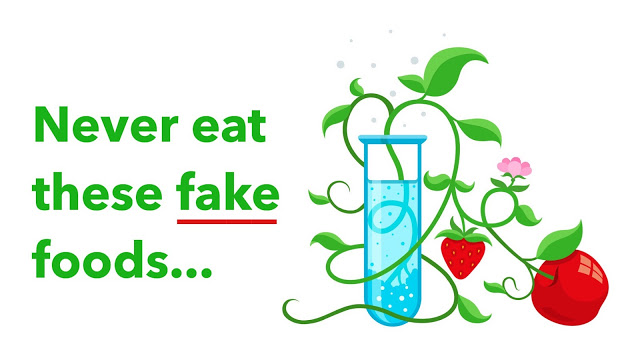 The fast food industry? Ethics aren’t much better there, either. Companies from Red Lobster – busted for selling, well, fake lobster; to upscale steak restaurants feeding customers “100%, grass-fed” beef from cows saturated with drugs and hormones seems to be the norm in the food industry.

In this article, we discuss seven foods known not only to be incredibly unhealthy; but foods marketed to the public – in many cases – as the exact opposite.

We all know regular soda is loaded with sugar, and terrible for our health. Kids drink of choice? Mountain Dew: 77 grams of sugar (12 teaspoons in a 20-ounce serving.)

Along came Diet Coke and Diet Pepsi, and loads of other sugar-free sodas. But something had something must’ve been substituted to give the product its flavor, right? Actually, a few things were added: aspartame, acesulfame K. neotame, sucralose; “artificial sweeteners” for short.

The problem is that most independent, scientific research ties “fake sugar” to several health-related issues. Depression, digestive problems, joint pain, metabolic disruptions, and neurological diseases are all cited as potential issues from consuming the stuff.

Fresh tomatoes are a delicious staple for many dishes. They are also incredibly healthy and loaded with beneficial antioxidants and nutrients.

Canned tomatoes? Not so much. Besides being heavily processed, canned tomatoes contain unhealthy levels of bisphenol-A (BPA) – a synthetic estrogen linked to reproductive problems; to diabetes, heart disease, and obesity.

A healthier choice: tomatoes in glass bottles, or of the organic variety.

Back in the day, workers making popcorn developed a strange disease that was called “popcorn lung.” The culprit? A food chemical by the name of Diacetyl.

As with most public health hazards, word eventually got out to the public. Companies responded by eliminating diacetyl; only to replace it with other additives with the same effects as diacetyl: dry cough, shortness of breath, wheezing, phlegm production, fatigue, drowsiness, headache, aches, fever, and nausea.

The better option? Make your popcorn with real butter. No, it isn’t necessarily a “healthy” choice,” but it won’t produce symptoms similar to the black lung either.

Contrary to popular opinion, fish sticks contain little to no fish at all. Rather unsurprising, since the cost of real crab is proportionately much higher.

Instead, these are often a mix of fish, additives (extract, flavor, seasonings, etcetera.) The fish used for these sticks are deliberately chosen just for its texture and color. Texture and color that is meant to resemble the appearance of a real fish – and confuse consumers.

The result: a high-processed product with loads to additives and preservatives, including monosodium glutamate (MSG), starches, and “food gum” to create texture.

Spray cheese, cheese-in-a-can, or whatever one may call it, is an extremely unhealthy, additive-laden product. Sold in a pressurized can, the product appealed to consumers who’d taken a liking to a tasty, convenient alternative to individually sliced or shredded cheese.

Whole cheese, though one may debate its health impact, is a relatively unadulterated product with few ingredients. Spray cheese, as mentioned, is loaded with additives; including substances from canola oil and lactic acid, to milk protein and whey protein concentrate.

Well, the “chicken nuggets” contain at little as 40 percent meat. The rest? Artificial mixtures of chicken “parts.” Add in the high fat and calorie content, and the salt and sugar additives, and it’s no wonder why this food makes our list.

White bread sold in most places is refined – a process which eliminates many of the nutrients. Rapid absorption of refined bread (or refined flour) spikes glucose levels within the body. Hence, the reason why diabetics and those with digestive issues often refrain from any consumption of white bread.