by RE
in Conspiracy, Depopulation, World Truth
0

by Paul A Philips; New Paradigm

The dark side, the world’s ruling elite (and many associates) are lost beings. They have lost their way from what is honest, decent and just: A number of us know that in their quest for total domination there is a secret world depopulation agenda in operation.

The overwhelming evidence for this: Documented facts, whistleblower testimony, bombshell quotes on record like those from Henry Kissinger, Zbigniew Brzezinski and Bill Gates … can only serve as a cue for you to take certain necessary counter-measures. 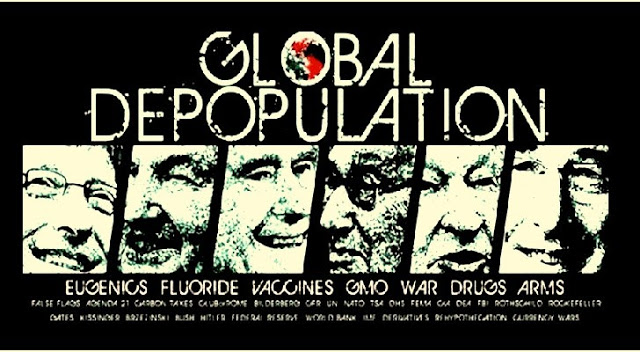 -Remember, the price of ignorance could be death.

In light of this, in these unpredictable or even tempestuous times to come, here are 7 ways to protect you and your loved ones from the ruling elite’s world depopulation agenda:

Watch the ruling elite and their associates like a hawk, especially certain key people making the major decisions. Learn to discern their hidden ulterior motives tied in to the planned depopulation agenda. For examples, watch out for their false flag diseases, forced medications, fake wars for profit… Remember, the elite want significant world depopulation because:

*A smaller world population would be easier to monitor, manipulate and control

*Be easier to overawe, keep dumbed down, docile and sick…

*Prevent overthrow from an overwhelming number of consciously awakened individuals taking action against their control system.

When the ruling elite operate on the principle ‘order out of chaos’ who knows what could happen. There could be a fake alien invasion, severe money shortages from a manufactured financial collapse, secret weaponized weather modification attacks such as that from HAARP (High Frequency Auroral Research Project), bio-warfare, or World War 3… -Be prepared where you can to survive the worst case scenarios.

For the survival of you and your loved ones, discernment, self-sufficiency and unity are keys: Educate yourself on survival. Make sure to have a long-term availability of food, water, backup power sources, DIY tools, first aid, a money supply or a stock of items that could be bartered such as precious metals, build supporting communities… -Hopefully, these things could enable survival in the weeks before some state of normality returns.

The elite are overseeing their world depopulation agenda by the long-term gradual weakening of our immune systems, leading to fatal diseases. They’re doing it through their poisonous and addictive medicine (some have given rise to increased suicides), and poisoning our food, water, land and air.

-To not be the affect of this onslaught, it is therefore vitally necessary to maintain a healthy immune system. Drink good clean water, eat a healthy diet of organic food, get regular sunlight, provide a natural and nourishing environment, exercise frequently, avoid toxicity where you can, detoxify, sleep well and try to maintain a state of well being.

Following on, evidence has shown us that the healthiest groups and populations are those who live naturally. For examples, there have been a number of studies on isolated indigenous tribes throughout the world such as the Hunzas tribe at the foothills of the Himalayas. Living naturally in a toxin-free natural farm food environment, absent from the spoils of the Western World, there had been no mental or physical disease . Another example of excellent health through living naturally in an isolated culture is the Amish people .

-Some people believe that the future of food will exist in small organic gardening and farming communities .

People’s mass refusal to co-operate is the key to preventing the ruling elite’s world depopulation agenda. For example, forced healthcare (sick care) such as the toxic vaccination programme would not work if there was an overwhelming mass refusal.

Say no to joining the military: Don’t be duped into becoming a death statistic, through fighting in one of the elite’s fake wars. -All the major wars and their reasons for fighting were based on false pretences, as they had been secretly manufactured by the ruling elite for power, profit and political gains.

If somehow there will come a time when the elite’s parasitic power structures would have collapsed and we get to not only survive but thrive as a race, then activism would indeed have played a vital part.

Manipulation will never beat true benevolence: Becoming part of the successful team of peaceful activists involved in the co-creation of a new planetary experience through an evolved humanity means having to chose the ‘service to others’ pathway as opposed to the ‘service to self’ pathway taken by the ruling elite and their associates.

Are you a peaceful activist? Are you: 1. spreading the word to others on what’s really happening in the world? 2. Doing your inner work and 3. Doing 1 and 2 peacefully for the new paradigm experience to manifest?

During challenging times, don’t become the affect of the circumstances. Instead of going into a drama, create an empowering way of being whereby you control the circumstances. –This may sound like something that’s easier said than done, but the answer is to simply choose it to maintain stability.

Indirectly, depopulation also involves circumstances where having children is no longer an option: For example, unlike earlier years, many modern day couples cannot afford to have children, as they are up to their necks in debt through student loans and sky-high mortgages. Then there are the rising cases of infertility , caused by for example, the potentially harmful EMF’s (electromagnetic frequencies) such as WI-Fi and their applications…

However, just because the dark side have dark plans it doesn’t necessarily mean that they will manifest. Indeed, the human race has shown to be quite remarkable during adversity. Adaptability and innovation have been (and will continue to be) the keys…

Will the onslaught of adversity serve as a massive wakeup call for the people? As a consequence, will the people go on to take back their rightful ownership of the world..?