by RE
in Chemtrails, Conspiracy
0

Is there a large-scale, secret program to spray chemicals into Earth’s atmosphere, resulting in “chemtrails?” Leading atmospheric scientists just say no.

Have you heard there’s a large-scale secret plan to spray chemicals into Earth’s atmosphere and that the resulting streaks across the sky are called chemtrails? In 2011, nearly 17% of people surveyed internationally said they believed this was true, or partly true. Now we learn, however, that atmospheric scientists are not among the believers. On August 12, 2016, scientists announced results of an international survey of leading atmospheric scientists. Seventy-six of the 77 scientists responding to the survey said they had not encountered evidence of a secret spraying program and agreed that well-understood physical and chemical processes can easily explain alleged “evidence” of chemtrails, often presented in the form of photos like the one at the top of this page. 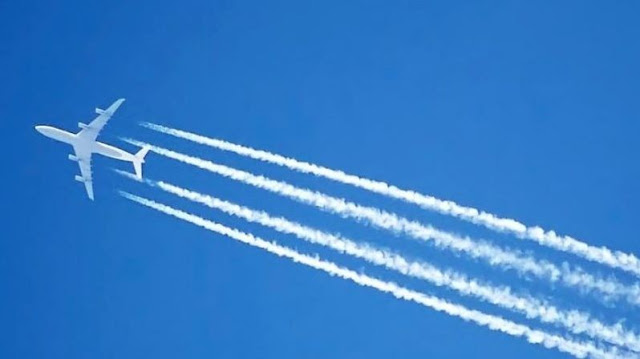 Seventy-six of 77 atmospheric scientists responding to a survey agree these are contrails – composed primarily of water in the form of ice crystals – not “chemtrails.”

The team surveyed two groups of experts: atmospheric chemists who specialize in condensation trails and geochemists working on atmospheric deposits of dust and pollution. Their findings are published in a peer-reviewed journal, Environmental Research Letters.

The survey’s authors say theirs is the first peer-reviewed journal paper addressing the chemtrail conspiracy theory . Financial support for it came from the University of California, Irvine, the Carnegie Institution for Science and a group called Near Zero , which is a 501c3 non-profit that produces scientific assessments of energy and climate issues. Atmospheric scientist Ken Caldeira – who is an author on the survey – told me that Near Zero is partially funded by Bill Gates, but he said Gates played no role in choosing this study topic. 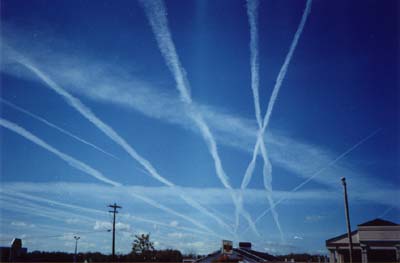 Multiple contrails in an area with high airline traffic, via NOAA. The survey team said: “The experts we surveyed resoundingly rejected contrail photographs and test results as evidence of a large-scale atmospheric conspiracy.”

The research team said it wanted to respond to the large number of people who say they believe in a secret spraying program. In recent years, websites – such as globalskywatch.com – have claimed to show evidence of this spraying. And yet team members said they aren’t trying to change the minds of those who believe in chemtrails. They say that’s probably not possible, since all statements from experts to the contrary of this particular conspiracy theory tend to be taken by believers as just more evidence of the conspiracy. Instead, said study co-author Steven J. Davis of UC Irvine:

We wanted to establish a scientific record on the topic of secret atmospheric spraying programs for the benefit of those in the public who haven’t made up their minds.

… what some people think are ‘chemtrails’ are just ordinary contrails, which are becoming more abundant as air travel expands. Also, it is possible that climate change is causing contrails to persist for longer periods than they used to.

I felt it was important to definitively show what real experts in contrails and aerosols think.

The video below features Stephen Davis talking about the study:

If you want to learn more about the results of Davis, Caldeira and colleagues’ recent survey, read the study published in Environmental Research Letters.

Or you might want to click over to Davis’ webpage on the subject , which contains, among other things, a more complete explanation of the diagram below.

Note they are using the acronym SLAP, which stands for “secret, large-scale atmospheric program.” 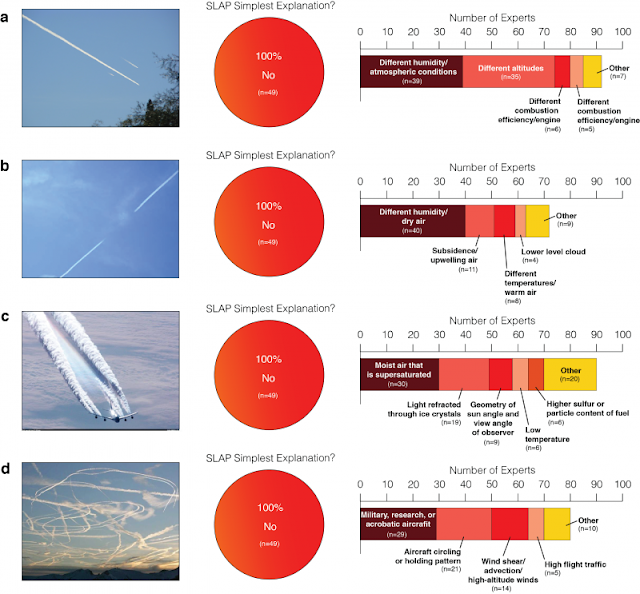 In the survey, scientists were presented with 4 different images of trails behind aircraft (a-d). They experts uniformly responded that a secret, large-scale atmospheric spraying program (SLAP) did not meet the test of Occam’s razor; that is, it’s not the simplest explanation for the depicted phenomena (pie charts). In each case, the stacked bars show the experts’ most common alternative explanations. Find more information about this diagram via study co-author Stephen J. Davis.

At EarthSky, we often read comments from our audience about chemtrails, especially when we post photos of atmospheric sky phenomena, such as iridescent clouds , which by the way are caused by especially small water droplets or ice crystals in the air and which were described in a 1954 classic book on wondrous things to see in the sky .

The comments at EarthSky frequently show chemtrail believers as lacking in basic knowledge about Earth’s atmosphere. In fact, our world’s atmosphere shifts and changes in subtle and unsubtle ways from one day to the next, and even hourly, depending on factors such as wind, humidity, temperature, height above ground and so on.

Les Cowley of the great website Atmospheric Optics – which explains optical sky phenomena such as halos, rainbows, glories, and much more – told me that he hears from chemtrail believers, too. At his website , he answers the question of why people may perceive contrails as looking “different” now than they used to:

Are there more contrails than there used to be? Yes, aircraft movements have considerably increased.

But there is another reason – Paradoxically, modern aircraft with more fuel-efficient engines and airframes form contrails under a wider range of atmospheric conditions than did older airplanes.

Modern aircraft waste less of the fuel’s combustion heat in the exhaust gases. The resulting cooler plumes have a higher relative humidity and their moisture condenses more readily to form contrails. 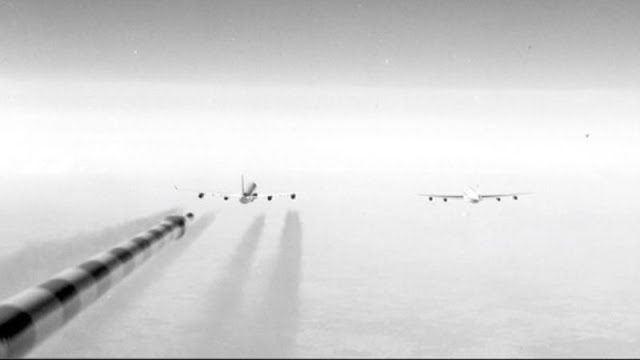 This image shows is of a scientific trial (Aerosp. Sci. Technol. 4 (2000) 391-401 ‘Influence of propulsion efficiency on contrail formation’). On the left is a modern Airbus A340 – on the right is an old Boeing 707. The striped pole is the nose probe of the following research aircraft. The aircraft are flying under identical conditions. The Airbus produces contrails, the older 707 does not. Image and caption via Les Cowley at Atmospheric Optics.

By the way, you might be wondering, why? Why would there be a large-scale secret effort to spray chemicals into Earth’s atmosphere? What’s the purpose? The answer to that question has been has been morphing for years, too, from the first whisperings about chemtrails associated with the mark of the beast to “the government is doing is” or “corporations are doing it,” for reasons of population control or mind control or to make us all unhealthy.

We often hear of chemtrails nowadays associated with the term geoengineering , which scientists used to use mainly when imagining terraforming other worlds . By the early part of this century, some atmospheric scientists – including Ken Caldeira – wanted to discuss geoengineering techniques for Earth, in case we someday need a last-ditch effort to save the world from extreme climate change. Atmospheric scientists met and published on the subject; perhaps they still do. But as they discussed geoengineering’s pros and cons , many began to feel that because climate is so complex – with so much potential for known and unknown feedbacks – geoengineering would be dangerous and perhaps even foolhardy.

In recent years, I’ve seen clips of Caldeira speaking about geoengineering in videos about chemtrails. That’s not because he thinks they’re real (he doesn’t); the clips are taken out of context. I asked Caldeira how he felt about his words being used in this way, and he told me:

Some people believe I am a nefarious individual secretly commanding a fleet of airplanes.

This is very annoying, but the more I deal with these people, the less I am angry at them.

Chemtrail believers tend to be well-meaning, frightened people who feel powerless to control their own destiny. They lack the technical expertise needed to separate reality from fantasy.

A note of conclusion … what of the 77th scientist in the survey? Seventy-six said “no chemtrails,” but the 77th did not say that. Caldeira told me that 77th scientist found barium in an aerosol sample in an area where the soils didn’t have much barium. This could potentially be evidence supporting atmospheric spraying of barium, or it could be a poor data sample, or it could be an indication of another source of environmental barium, which is used in oil and gas drilling muds, automotive paints, stabilizers for plastics, case hardening steels, bricks, tiles, lubricating oils, and jet fuel as well as in various types of pesticides, and much more. Read here about the sources of environmental barium .

I asked Caldeira who the 77th scientist was, so I could contact him or her and ask more questions, but so far he hasn’t told me. If I find out … I’ll add a note here.

Bottom line: Leading atmospheric scientists were surveyed about whether they’ve heard of an on-going, large-scale, secret plan to spray chemicals into Earth’s atmosphere. The answer was a resounding no, and the scientists said ordinary physical and chemical processes in the atmosphere can account for the so-called “evidence” of so-called “chemtrails.”