by RE
in Health
0

One of the keys to keeping your brain nice and plump and in proper working order is avoiding soda – and not just the sugar-sweetened kind, either. Drinking sodas, whether regular or diet, is bad for brain health, 2 recent studies show. [1]

One study showed that people who drank diet soda every day were three times more likely to have a stroke or develop dementia over 10 years compared with those who didn’t consume any diet soda.

For the first study , researchers interviewed about 43,000 people, age 45 and older, three times over seven years, and asked them whether they drank any diet or sugar-sweetened beverages. Toward the end of the study, the researchers started tracking the participants’ health for cases of stroke and dementia. This monitoring continued for 10 years.

During the monitoring period, 97 people had a stroke, and 81 developed dementia. Sixty-three of the 81 had dementia consistent with Alzheimer’s disease.

The scientists concluded that diet beverage consumption – but not sugary drink consumption – was associated with a higher risk of stroke and dementia over a 10-year period.

It’s not clear why; however, diet drinks have been linked in past studies to obesity and diabetes, which might also be linked with poor blood circulation. Circulation problems may increase a person’s risk of stroke or dementia because a constant flow of blood is necessary for proper brain functioning. 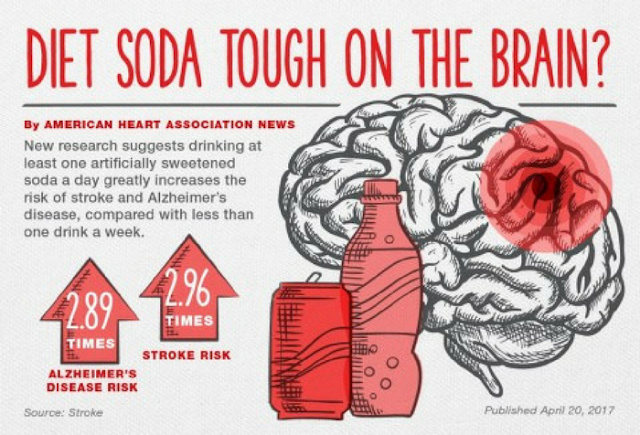 In the second study , researchers looked at brain scans and results of cognitive tests conducted on about 4,000 people. Participants self-reported whether they drank any diet or sugary beverages, and if so, how much.

The team controlled for cholesterol, smoking, diabetes, blood pressure, and various other health and behavioral factors. [2]

As in the first study, the mechanisms behind the decline in brain volume and memory may be tied to poor circulation, as previous research has linked high sugar intake with diabetes and high blood pressure. Both conditions are linked to compromised blood circulation that may negatively affect brain health. [1]

Lead author Matthew P. Pase, a senior research fellow at Boston University, says of the results of the second study:

“Although we can’t prove cause and effect, these data suggest that we should be cautious about drinking sugary beverages. They’re empty calories that contribute to weight gain and metabolic disease.” [2]