Every single year the topic of UFOs continues to gain traction with regards to credibility and evidence. A lot of information has emerged over the past few years that has taken these subjects out of the ‘conspiracy theory’ realm and into ones of serious inquiry.

This particular story originates from the US governments Stargate Program , which lasted more than two decades. The program studied various topics within the dimensions of parapsychology, such at telepathy, psychokensis, remote viewing and more.

It’s an excellent example of unacknowledged and waived Secret Access Programs. These programs do not exist publicly, but they do indeed exist. They are commonly referred to as ‘deep black programs.’ A 1997 US Senate report described them as “so sensitive that they are exempt from standard reporting requirements to the Congress.” ( source ) 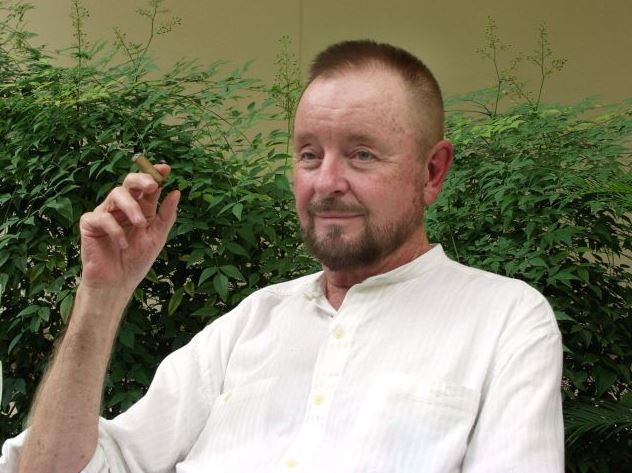 A gentlemen by the name if Ingo Swann (seen in the picture above) was one of multiple main participants within the program within ‘special abilities.’ ( source )

Before we go any further, it’s important to note that US intelligence agencies have had a heavy interest in this type of thing for a long time. Here and here are a few more examples that illustrate this point further. You can learn more about how they link to the CIA here .

Swann was able to successfully describe and view a ring around Jupiter before scientists had no idea it existed.

This took place precisely before the first ever flyby of Jupiter by NASA’s Pioneer 10 spacecraft, which confirmed that the ring did actually exist. These results were published in advance of the rings’ discovery. ( source )

This was one of many successful ‘hits’ that came out of the Remote Viewing program. It was quite a successful program, which is why it ran for 25 years. A lot of controversy surrounded its termination, and who knows how much of what these findings uncovered remain classified. United States Major General, Albert Stubblebine, was a major proponent of these programs, and one of America’s most distinguished soldiers with more than than 16,000 soldiers under his command. He said that they uncovered structures on the surface of Mars, as well as on the interior that were not built by humans.

What was not published in the literature, after it was declassified, were Swann’s experiences in the world of intelligence. He did, however, write a book called Penetration where he detailed some of his experiences, and many of them dealt with UFOs as well as extraterrestrials.

Much of Swann’s time during this period was spent at the Stanford Research Institute where the remote viewing program was headquartered under the watch of scientists Hal Puthoff and Russell Targ, the authors of some of the studies cited above.

In his book, he describes a gentlemen who he calls Mr. Axelrod, a secretive government agent obviously belonging to some intelligence agency.

One day, this man entered into the secured facility at Stanford, which was not an easy thing to do. He found Swann and persuaded him to leave with him.

Axelrod was accompanied by two twins, who were very tall and mysterious. They dressed in the typical ‘cloak and dagger’ intelligence agency outfit.

The four of them flew to the west coast where Swann believed it to be the Alaskan wilderness, although he wasn’t certain and was told that it’s best he did not know.

They were flying in a learjet and found an area deep in the forest which seemed to be for their own use. They trekked a very long time.

Richard Dolan, one of the world’s foremost authorities on the topic of UFOs, describes the incident well in his book, UFOs & The National Security State, The Cover -Up Exposed 1973-1991 , so I will quote it from here on in starting on page 154:

“They came to a small lake, and Axelrod said that as dawn approached, Swann would be able to see “it” through the pines. ‘We now wait and hope we are lucky. Say nothing, do not make any noise…they detect heat, noise, motion like mad.”

“Dawn arrived, and Swann saw a fog developing over the lake. This went on for five minutes, until the fog developed a luminous neon-blue color. Then, according to Swann, the color changed to an “angry purple” Axelrod and one of the twins each placed a hand firmly on Swann’s shoulders while “a network of purple, red, and yellow lightning bolts shot in all crazy directions through the ‘cloud.’ Swann said he would have jumped if the two had not held him down. He saw an object, almost transparent at first, but then “solidly visible over the lake.” It was triangular or diamond-shaped, growing in size.”

“Swann, in terror and amazement, heard a strong wind moving past, rustling the pine trees so much that some cones and branches fell on them. The object then began to shoot out ‘ruby red laster-like beams’ as it continued to grow even more in size while maintaining its position on the lake. Very quietly, one of the twins said, ‘Shit! They’re enveloping the area. They’re going to spot us.”

“As Swann later recalled the event, some of the red laser beams from the object were ‘blasting’ pine trees, and he could hear low frequency pulsations. Axelrod whispered to Swann that the beams were probably honing in on deer or other forest creatures, as they sense biological body heat. ‘They’re sure to hone in on us,’ he told Swann. Just then, one of the twins literally lifted and dragged Swann away, but not before Swann noticed the water of the lake surging upward, ‘like a waterfall going upward, as if being sucked into the ‘machine.’”

“The four ran quickly and at great length, sustaining minor cuts and bruises. Eventually they stopped, breathing hard, and waited for more than thirty minutes, until one of the twins said all was clear.”

“Axelrod then asked Swann whether he could ‘sense’ anything form the craft.”

At this point it’s quite obvious why Swann was taken from his position and role at Stanford Research Institute and into this situation. It seemed that these ‘government’ agents believed Swann could provide some detail about what was happening here and help the government with their research and interest in UFOs.

“Swann burst out laughing. ‘You’re completely nuts, Axel! I have to be calm, cool, collected and in good shape to sense anything.’ But Swann offered the insight that the craft was ‘a drone of some kind, unmanned, controlled from somewhere else.” Axelrod asked him what it was doing there, to which Swann replied ‘Well, for chrissakes! It was thirsty! Taking on water, obviously. Someone, somewhere needs water…so I suppose they just come and get it. You don’t need to be a psychic to see that.’ Essentially, said Swann, ‘they’ treated Earth as the neighbourhood supermarket.’

“Before taking Swann back, Axelrod said, ‘I shouldn’t tell you, but our mission will be disbanded shortly and the work picked up by others, because of strategic security reasons involved…’ ‘Others,’ said Swann, ‘who will not mix in with psychics, I take it.’ ‘You got it,’ Axelrod replied. Swann last saw Axelrod at the San Jose Airport, and never heard from him again.”

Below is a video of Ingo Speaking about a few of his experiences within the program, and what it was like. He was a very bright man with tremendous amounts of insight.

It’s not the easiest thing to understand, but I thought it was important to share a video of him with you after writing this article, it’s full of a number of interesting revelations.