Drinking Consciousness: A Portal To A Better Understanding Of The Universe

I never thought drinking a drink could change so much. Mind you this was a special kind of drink and I must admit the thought had crossed my mind that I could have a life changing experience. But this was something else.

I have recently returned from the Amazon rainforest where I drank ayahuasca for the first time, in total I was in Peru for 2 weeks, 11 day of which I spent in the jungle. There was 5 ayahuasca ceremonies with processing the following day and 1 cacao ceremony. There was also the option for Kambo/Sappo which is frog poison which is administered through a burn on your arm and it flushes toxins from your body. I took 2 doses of that.

The group was 7 of us total with 2 shaman, 2 helpers (but they were a whole lot more than helpers) a few volunteers and a bunch of animals. The balance was perfect! 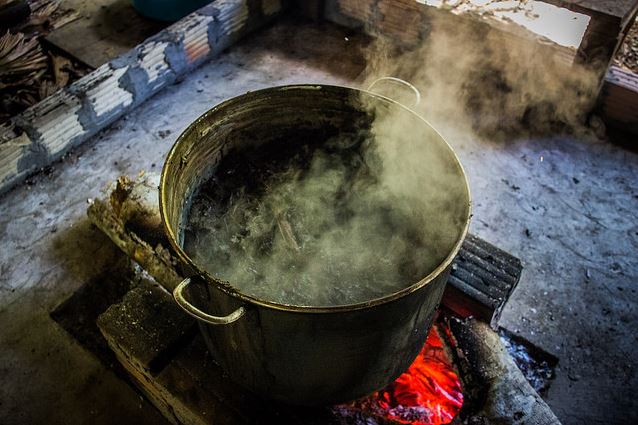 We were bang smack in the middle of untouched jungle and had shared rooms called tambos, which I shared with another guy and a tarantula.

My ayahuasca experiences is in no way typical, as is no one else’s experience, as far as I am aware. I believe after a little reading that ayahuasca works on people on a genetic level. Meaning you get what you need rather than what you want and if you try to hard to get what you want you may just end up getting not all that much.

In the first ceremony my mind and body was well and truly blown as my spine clicked and realigned, I whistled songs I have never heard before as well as making some extremely strange animal noises. I also had a vision for a medicine (plant) that I should take and was handed a spiritual gift of which I am still trying to decode its meaning. I also experienced a rebirth, and I mean physically, and got slapped by the shaman as they thought I was traveling to far into the other dimensions. The next day I read a whole book, that was incredibly complex and retain just about all the information.

Ceremony 2 got progressively weirder in conjunction with Kambo/Sappo in the morning and ayahuasca later in the evening ceremony. I continued with the strange sounds and songs, and after being certain Hillary Clinton would win the election I got a 100% clear and certain vision that Trump would win, which I put in a video and shared with the group before the results. I also had a pleasant near death experience in which they had to give me lemon water and cover me in Aqua Florida which is a chemical that helps return you to reality. Neither came close to returning me. When I say near death I don’t mean I actually nearly died, but I entered a world that could only be understood of as close to death, It was beautiful.

Ceremony 3 was not as hardcore, but the magic definitely didn’t end. I sat and telepathically sent messages to about 100 people, while my hands, legs and entire body moved all over the place. More than one person confirmed receiving my message which is always a little helpful in reassuring yourself you are not entirely losing your mind. After this session I realised I have a gift for decoding ancient Egyptian codes and images, which was news to me and great because I had a precognition and brought a t-shirt with me that told me we are now moving into a new age of consciousness and a global revolution, in which money will cease to exist and love will be the new currency.

In the fourth the information kept flowing and it was at this point I realised every number has lots of different meanings and the whole number system is decodable, so I of course decoded the whole number system before midday the following day. I then realised the word fuck is totally necessary and in comparison to all the atrocities we have been through as a species, it really doesn’t matter, even if it is your kids saying it.

It was then I decided to play a game and see if I could answer any question I put in front of myself, which I continued to do. Maybe the answers were correct or perhaps I was bullshitting myself, either way I was pretty convincing to myself.

In between the 4th and 5th ceremony, I sat under a tree, which I believe to be the most powerful tree in the world. I then reached a very deep spiritual state in which butterflies surrounded me, bees collected my sweat and red ants climbed all over me without stinging me, then some giant hornet looking thing came and totally threw me off my state of bliss, I think he just wanted to join the party, but I was not ready for that.

Ceremony 5 was pretty much the same, I realised I can read birth charts with my number system I just derived from decoding the number code. I channeled the blueprint for the new civilisation that will work in complete unity on a global scale and done the usual whistling of songs I have never heard or sung in my life. I also had some contact with the dead and was given a message for a loved one.

The last ceremony was cacao a very gentle medicine I have taken multiple times before. This time it was not gentle, I spent most of the time hysterically laughing, because I figured out the meaning of life, which is life’s one big joke that is both funny and unfunny simultaneously. I then reached spiritual enlightenment, realised Buddha had it wrong because he was attached to non attachment and Jesus was wrong as he thought he had to suffer for our sins, which goes against the blueprint I downloaded in the previous ceremony.

I also realised there are unlimited dimension, simultaneously replicating in unlimited directions, which include different dimensions for different species. Everything that happens is dual (apart from god or your interpretation of god), meaning that everything is both right and wrong, light and dark, yin and yang, just at a different measurement.

Then on the final day after skipping around the jungle for 2 weeks like Mowgli from the Jungle Book I became scared of the dark, got attacked by a tarantula and nearly broke my nose with my head torch.

I then realised I had no idea if any of what went on was real, but I keep reminding myself by continuing to decode ancient pictures and number systems.

There is also a lot more that happened, but if I told you, you would never believe me. So I’ll leave that part to the imagination. I tried my best in words to sum up the experience, but truth be told I cannot. Some doors once opened can never be shut again, but I am grateful that this door was opened for me.

I lost my mind, found it again, and bordered on the edges of both sanity and insanity. Good preparation for helping others I think is to first understand what it is like to lose your mind!

Is any of what I said true? Every single word! But In the wise words of Aristotle “don’t believe everything you read on Facebook”

Maybe I am just about stupid enough to pull of some of the stuff I believe I can and the reason for this is I know we can all create our own reality, as long as we are in line with our true path! So don’t forget it is all just a game and when you realise that no one can disturb your constant party. This revolution will definitely be televised!

P.S. Our pet tarantula lost a leg and it grew back the following day, turns out this is typical, but I thought it was a miracle. Turns out that all we perceive to be miracles are actually just normal in some circumstances, I think there is a message in this for you! Much love, Luke