by RE
in Chemtrails, Conspiracy
0

Have you ever felt sick after flying, only to assume it’s jetlag or a virus you picked up from another passenger? Well, think again! You might have been exposed to an insecticide, pesticides or other toxic chemicals – deliberately used by airline staff.

I think airline passengers should be outraged to know that poisonous chemicals are now being sprayed on planes regularly – DURING the flight, while travelers are inside the plane, This is true – the United States government is actually pushing this agenda of poisoning passengers. 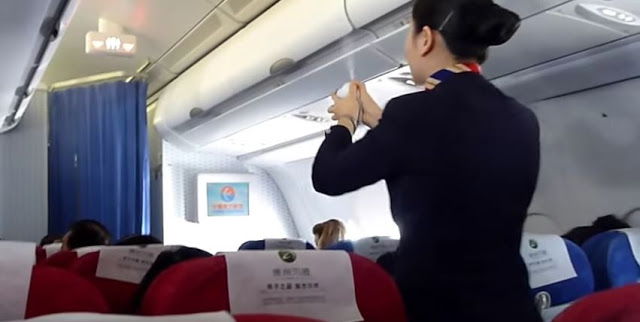 You can’t make this stuff up: Check out this disturbing video – does this look right to you?


Reminds me of Nazi Germany: Are airplane cabins safe or a gas chamber?

This process is being referred to as “disinsection,” a word that seems to have been made up by the TSA or airline industry. Disinsection, or the spraying of an insecticide or pesticides on planes, is now permitted under international law. The Department of Transportation says that the supposed intent is to protect public health, crops and agriculture, and the environment.

The International Civil Aviation Organization and World Health Organization (WHO) admit that aircraft cabins are being sprayed with what they are calling a “fast-acting insecticide” with passengers on board, right before takeoff. Some airlines are instead treating aircraft interiors with a “residual-insecticide aerosol” right before passengers get on board.

This is truly sickening behavior: These toxic chemicals are also being applied directly to the aircraft’s internal surfaces and, to make matters worse, passengers get to breathe in this crap into their lungs.

In this next video, airline passengers are being sprayed with toxic chemicals during a flight and the airline staff person says, ‘don’t film!’ (Check out her facial expression – while spraying passengers – it says it all)

The spraying of toxic chemicals like pesticides or an insecticide inside an enclosed, pressurized airplane cabin is beyond alarming. It is an assault on the senses and nervous systems of the passengers of the plane. Those with a pre-existing health condition or compromised immune system are even more at risk for suffering unwanted health effects.

However, all passengers exposed to these toxic chemicals “agree” to the conditions, even if they aren’t aware of it. The fact that spraying will occur on a flight is stated in the fine print when the airline tickets are purchased. Passengers implicitly agree to being sprayed just by buying a ticket for a flight where these practices will take place.

Many airline passengers are already reporting negative health effects from exposure to toxic chemicals on flights. For example, flu-like symptoms, sinus issues, rash/hives, headaches and swollen joints are just some of the horrible effects. However, far more serious issues like acute respiratory problems and anaphylactic shock have occurred. Chronic issues affecting the neurological and immune systems have also been reported.

The most common aircraft pesticides used on airplanes are synthetic pyrethroids, specifically permethrin and d-phenothrin. Remember, they kill insects by attacking their nervous systems.

What are these chemicals doing to human nervous systems? Numerous studies have linked permethrin with Parkinson’s disease. (this has got to stop!)

Not surprising, at this time, the World Health Organization is downplaying the symptoms and concerns voiced by passengers. They state “there’s no evidence” that these insecticide sprays cause risk to human health, and that the sprays are safe.

The arrogance of these statements is appalling. Even a layperson knows not to use chemical sprays in an area that is not ventilated. In the short term, the only recourse is to avoid flights where this practice takes place. However, airlines should be strongly petitioned to find non-toxic methods of dealing with pests.

Bottom line: Before you take that flight – make a phone call to your airline of choice and ask the question, “are you spraying insecticides on this flight.”

Reaching hundreds of thousands of people, worldwide, as a personal health consultant, writer and radio talk show host, Jonathan has been educating the public on the health benefits of an organic, non-GMO diet along with high-quality supplementation and healthy lifestyle habits, including exercise and meditation.