HAARP in Action and Its True Purpose

The High Frequency Active Auroral Research Program (HAARP) is not an imagined conspiracy theory. The resounding ‘sonic boom’ and strange flashing lights of a HAARP ‘experiment’ have been observed by countless citizens . So is it just a benign technology designed to enhance the ionosphere, as our government has claimed , or is it up to other abominable tasks?

We are told that HAARP’s powerful antennae are just creating ‘controlled local modifications of the ionosphere’, but there is surely more than that going on. The theories about what HAARP really does abound, and some will make you think long and hard before dismissing them, no matter how far out they seem.

The facts are that the US military has spent billions on the project, and they constantly downplay its true power. We know for certain HAARP has the ability to do the following things: 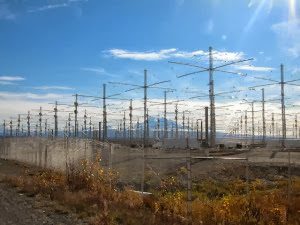 1. Create an effect in the atmosphere as dramatic as that of a thermonuclear bomb that can knock out all radio transmission and other frequencies over a million square miles.

2. Replace the current method that military submarines communicate with one another, which can work in the deepest waters imaginable.

3. Provide a better radar system than the current ‘over-the-horizon’ technology being utilized.

4. Verify where oil, gas deposits, or mineral deposits are in any place on earth, and thereby determine the next ‘place of war’ or country to indebt to the current empire.

5. Determine if other nations are keeping their promises to abide by the nuclear nonproliferation treaty (they probably aren’t just the same way we aren’t.)

6. Detect ‘enemy’ planes or even UFOs.

HAARP was created with the help of physicist Bernard J. Eastlund, and his US patent from the 1980’s titled ‘Method and Apparatus for Altering a Region in the Earth’s Atmosphere, Ionosphere, and/or Magnetosphere’ (US #4,686,605). His patent, however, was based on the work of Nikola Tesla , who suggested that radio frequencies could transmit approximately one cubic watt per centimeter to anywhere in on the planet without wires. Power generated from the ground could be sent into the upper reaches of the earth’s atmosphere for miles away from the planet’s surface.

Some believe HAARP is simply a way of preventing earthquakes and other disastrous weather, but with the Typhoon Haiyan in the Philippines and worse storms to come , is it really possible HAARPP is simply a ‘bad’ weather preventative? If anything, the US government is playing with Tesla’s greatest work to cause innumerable floods, droughts, hurricanes, tsunamis, and tornados .

Others suppose that if the earth is pretty much trashed, and/or if portals or vortexes are created, then negative life-forms could come in and take it over more easily.

Still others believe it is a form of mind-control on a mass scale, also based on Nikola Tesla’s findings that human beings operate on an 8 ohm frequency .

What Happened to The Higher Vibrating Colors?

According to some conspirers, the true purpose of HAARP technologies is to block out certain frequencies of light that we normally observe in the full-spectrum illuminated skies — otherwise known as a rainbow. I myself have noticed two rainbows in the chemtrail-covered skies lately, and there is something wrong with them – they only have the lower three vibrations of light – red, orange, and yellow. While this could simply be the play of the sun in the sky as it sets, and Lord knows in Texas we observe some very interesting sunsets, it seems that the higher vibrational colors are indeed absent. Where are the beautiful blue, green, indigo and violet in my rainbows?

Some are claiming that by removing these color vibrations or frequencies, the government and whomever they are colluding with, are reducing the natural color vibrations that block negative energy or dark entities from playing on our planet.

Furthermore there are over 2700 satellites orbiting the planet right now, and with HAARP technology, according to an informant, these can be used to tune the ‘Alpha and Omega frequencies’ that reach the earth. In essence, this technology can add to the negative frequencies we are being exposed to, or enhance the positive ones.

Whether HAARP is a military candy store, or a cosmic pandora’s box will remain to be seen, but it certainly isn’t a pop-gun aimed in the skies, and certainly much more plausible, is our government’s intent to use it to control the masses somehow. The old tin foil hat jokes might just have been a sincere warning to us all.

Christina Sarich is a musician, yogi, humanitarian and freelance writer who channels many hours of studying Lao Tzu , Paramahansa Yogananda , Rob Brezny , Miles Davis , and Tom Robbins into interesting tidbits to help you Wake up Your Sleepy Little Head, and See the Big Picture. Her blog is Yoga for the New World . Her latest book is Pharma Sutra: Healing the Body And Mind Through the Art of Yoga.