by RE
in Haarp, Knowledge, News, Population Control, World Truth
0

Suffering from delusions of grandeur, hegemonic powers strenuously strive to subdue societies and sordidly seek to stretch their sphere of influence across the globe one way or another.

These egregiously egotistical entities which, preposterously enough, regard themselves as the masters of the macrocosm, exhaust all options available to them to secure their global domination.

From making overtures to making threats, from subversion to invasion, from velvet revolutions to military coups, and the list goes on, there are no ways and means off-limits to these self-styled rulers when it comes to advancing their interests.

Servile states pose little trouble to these expansionists as they are subservient enough not to show any resistance to the dictates of the domineers. 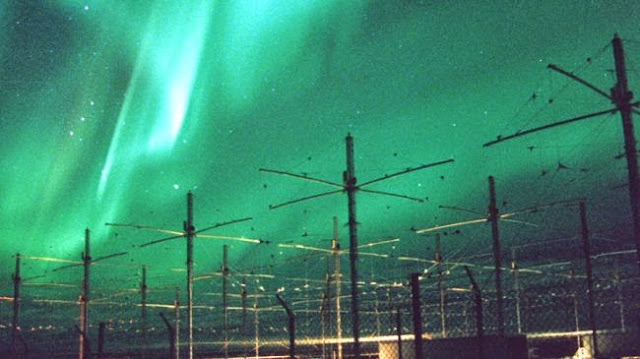 Uncompromising nations, on the other hand, are more difficult to deal with, so much so that the hegemons may opt for subversive acts, coups or even invasion.

Of course, there are a few nations, namely Iran, Syria and Venezuela, who have refused to capitulate to the domineering powers and stood firm against bullying.

Global hegemons have quite a repertoire of weapons, military and otherwise, to secure their domination around the world. One such weapon, some analysts argue, is a cutting-edge technology involving radio waves. And one of several programs developed based on the same technology is HAARP.

HAARP, the High Frequency Active Auroral Research Program, is, as the name suggests, a so-called “research program” jointly funded by the US Air Force, the US Navy, the University of Alaska and the Pentagon’s Defense Advanced Research Projects Agency (DARPA).

HAARP comprises an array of 180 antennas approximately 72 feet (22 meters) tall linked together to function as one giant antenna to focus the energy coming out of the antenna field and inject that energy into the ionosphere (a region of the upper atmosphere). HAARP, in fact, functions as a gargantuan lens which focuses millions of watts of ELF (Extremely Low Frequency) waves on a tiny patch of the atmosphere.

An expert says the energy emitted from HAARP is 72,000 times more intense than that of waves from a conventional radio station.

“The amount of energy we are talking about here is 3.6 million watts. … The largest legal AM radio station in North America is 50 thousand watts. HAARP is 72,000 50-thousand-watt radio stations injecting their entire output into a spot …,” says an expert familiar with the project.

With such immense power, HAARP is believed to be able to trigger natural disasters such as tsunamis, floods and earthquakes.

HAARP lies at the heart of numerous conspiracy theories.

Nick Begich Jr., the son of former US lawmaker Nick Begich and author of Angels Don’t Play This HAARP, has claimed that HAARP could trigger earthquakes and turn the upper atmosphere into a giant lens, so that “the sky would literally appear to burn.” He also claims that HAARP could be used as a mind control device.

Former Governor of Minnesota and noted conspiracy theorist Jesse Ventura has questioned whether the US government is using HAARP to manipulate the weather or to bombard people with mind-controlling radio waves.

“This thing can knock planes out of the air. It can control the weather. And it’s a very dangerous, dangerous weapon,” Ventura is quoted as saying in the article ‘Ventura seeks out conspiracy theories at Alaska station’ published on juneauempire.com.

Ventura reportedly made an official request to visit the site, but his demand was rejected.

Physicist Bernard Eastlund has claimed that HAARP includes technology based on his own patents that has the capability to modify weather and neutralize satellites.

Ironically enough, even the European Parliament has taken a swipe at the program, citing environmental concerns. Europe’s misgivings are highlighted in an article dubbed EU clashes with US over atmosphere tests published on physicsworld.com back in 1998. This is ironic because the European Incoherent Scatter Scientific Association (EISCAT) operates an ionospheric heating facility near Tromsø, Norway. You know, those who live in glass houses shouldn’t throw stones!

Not to mention the HAARP station near Gakona, there are two other ionospheric heating facilities in America: the High Power Auroral Stimulation (HIPAS) Observatory near Fairbanks, Alaska, which, according to Wikipedia, was dismantled in 2009, and one at the Arecibo Observatory in Puerto Rico.

There are said to be a few other such facilities around the world. The question is, whether the HAARP technology can really be used to manipulate the weather and trigger natural disasters.

There are numerous conspiracy theories claiming that disasters such as the magnitude 9.0 undersea quake off the coast of Japan that triggered a huge tsunami in 2011, the 2010 Haiti earthquake, and the devastating temblor which struck China in 2008, were set off by the HAARP technology or relevant experiments.

There is no conclusive evidence to corroborate the claims. Nevertheless, some US officials have hinted at the possibility of electromagnetic waves being used as a tool to effect changes to the atmosphere or natural features.

On April 28, 1997, then US Secretary of Defense William S. Cohen delivered a keynote speech at the Conference on Terrorism, Weapons of Mass Destruction and US Strategy at the University of Georgia in Athens. When asked a question about terrorism, Cohen had this to say as part of his response about the type of technology that existed, even back then:

“Others are engaging even in an eco-type terrorism whereby they can alter the climate, set off earthquakes, volcanoes remotely through the use of electromagnetic waves.”

For a detailed transcript of his comments, you may log on here .

Whether or not the HAARP technology has been deliberately used to spark natural disasters is anybody’s guess at this point. But one thing is certain. Domineering powers will explore all avenues to secure their footholds the world over and to advance their interests at any cost. Hell-bent on establishing a global empire, the hegemonic states bide their time to interfere, intrude or invade to achieve their ends.

And it is incumbent upon all independent nations to keep their eyes peeled for any imperialistic conspiracies and nip any evil in the bud.