Hypothalamus: The Connection between Diet, GMO and Decline?

As a response to our special report Corntamination: Edible Hepatitis B Vaccines Coming Soon – which covers the troubling issues from a major GMO contamination scandal after experimental pharmaceutical drugs were grown in open air fields of genetically engineered test corn NEXT TO food crops for human and animal consumption – someone raised an interesting issue – somewhat speculative, yet compelling because of the importance.

DB Fisher: are you really sure you understand the AIR CURRENTS in these places where they did this //testing??? I think it may have been about spreading pollen to contaminate the ENTIRE American Corn Crop as an entirety, just look at the places you showed now overlay an air current report and look what you have… 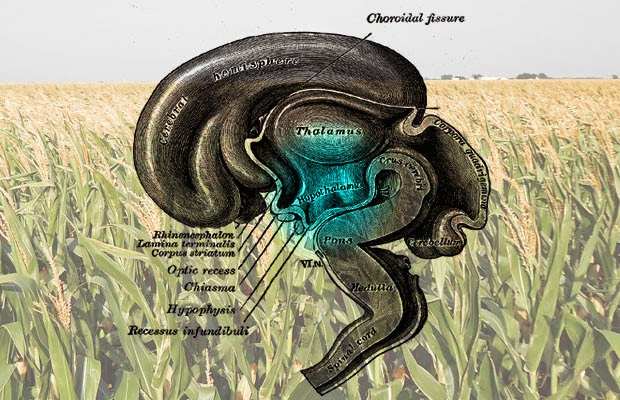 Here is my response:

Aaron: That’s a big part of the implication, for sure – what may have happened, could have happened … did it happen? And, dread, was it, could it, done… on purpose? The horror is real. The documentary The World According to Monsanto refers to a mass scale event in Mexico where GM corn “accidentally” contaminated vast acreages of heritage maize grown by traditional farmers – generally following the refusal there to institute GM corn over the more nutrient dense heritage maize, which has infinite levels of diversity and extremely deep ties to the entire history of the people there. BIG, BIG STUFF… changes in the DNA will have major consequences to life at large, and will surely impact our own.

Al Gore’s “boogeyman” version of climate change is, ultimately, a tragic “official” explanation to DISTRACT and GIVE COVER FOR the systematic rape of our planet through a “playing God” engineering team that have: developed this massive and impersonal, technological society; changed the landscape of the world with Big Agra under the direction of the Rockefeller Foundation, et al.; fast tracked planetary geoengineering (horrible abuse of little kid “new toy” powers); depleted the land, water, livestock (including us) and poisoned, weakened and killed its present inhabitants, forever affecting our future.

How many among us have cancer, infertility, obesity, et al? Is it the same as the days past?

Why is this happening? I’ll throw this in as a good place to start the investigation (hat tip to Dr. Russell Blaylock, M.D. (who wrote extensively on the dangers of MSG, aspartame and other excitotoxins) for a window into this):

How many cancers and conditions originate in the hypothalamus alone, or more fully, the HPA-axis (hypothalamic-pituitary-adrenal) . It comprises possibly mankind’s greatest Achilles’ Heel.

Our hypothalamus and HPA-axis encompass a host of vital brain regulators – essential and dynamic bodily functions including growth & hunger mechanisms (overeating, anyone?) that are connected to the digestive & bowel systems, as well as pituitary gland; our glandular and endocrine systems which drive hormones, reproduction and sexual behavior as well as our pineal gland, which affects many complex brain activities and associated “Third Eye” consciousness and much more.

This means it can be influenced, affected, overused and damaged by harmful constituents in our bloodstream and body, and of course stress. We are under attack; we are sensitive to environmental toxins, whether they are introduced at background levels by the natural cycle, or more disruptively through industrial discharge, medical treatments or – most pivotally – our diet.

How many MSG- and aspartame-laden junk foods and GMO-laden prepackaged foods will later be seen as major – or absolutely pivotal – factors in the rise of diabetes, obesity, fertility issues, various cancers, and especially new allergies – most dramatically seen in the sudden population influx in the categories of Celiac’s Disease and gluten intolerance as well as digestive disorders such as leaky gut, Crohn’s and irritable bowel syndrome. This list goes on, but this is enough to raise the question…

Or should the known side effects of vaccines be seen as most connected to this problem. The vulnerability of the hypothalamus remains a constant factor in this conjecturing in either scenario.

It is absolutely absurd to think that issues as enormous as GMO are not affecting our lives and genetic integrity. With clear evidence that “testing” and “regulation” are more like checklist formalities required under the current business + government framework, that is seen most clearly through an understanding of Fascism as corporatism – government sponsored market dominance … an absolute juggernaut monster that must be carefully restrained and fed only at the risk of biting the hand that feeds.

Have you asked your doctor about the hypothalamus?