If Consciousness is a Door, Kundalini Yoga is the Key

Imagine you could harness, at will, the mind-body connection responsible for the heightened mental states giving rise to creative genius, inspiration, bliss, mystical experiences, and possibly even enlightenment?

You may have noticed how sciences such as biology, physics, medicine, and even theology increasingly overlap, with energy and consciousness at the center. Energy medicine is revolutionizing our approach to health, as science gives us ever-increasing evidence for the inseparability of mind and body.

But what is this thing called “energy”? You may accept that it exists—even welcome assistance by various energy healers from disciplines such as acupuncture, Qigong, EFT, Jin Shin Jyutsu and others. But do you understand exactly what they’re doing or how it works? If someone asked you to describe this energy, you might struggle to come up with a definition.

It’s not easy to wrap our heads around things we cannot see, hear or touch, and it’s even more challenging for scientists to quantify it.

An ancient concept called “Kundalini” provides us with a framework for understanding this nebulous idea, and Kundalini Yoga gives us a way to work with it. This article is Part 1 in a two-part series about Kundalini as an intelligent life force, and Kundalini Yoga as the practice that can help it awaken.

“One of the first results of research on Kundalini, in my view, would be to show that the human brain is already evolving towards a higher predetermined state of consciousness, a state that has been the crowning vision of the mystics and prophets.” – Gopi Krishna

The Yoga of Awareness

Kundalini Yoga is the most comprehensive of yoga traditions . The primary objective is to awaken the full potential in each of us. Kundalini Yoga helps us to cultivate inner stillness so we can truly listen, expand our awareness and achieve excellence in all that we do.

“Kundalini” literally means “the curl of the lock of hair of the beloved,” alluding to the flow of energy and consciousness that exists within each of us, enabling us to “merge with the Universal Self.”

Kundalini Yoga blends meditation and ancient mantras with physical exercises (asanas), hand positions (mudras), breathing techniques (pranayama), and sound (naad). All of these are merged into carefully choreographed exercises called kriyas that open up energy flow in the body, channeling it in a way that begins stripping away the veils of consciousness. This type of yoga balances and purifies all of the systems of the body, while at the same time calming and sharpening the mind.

Kundalini Yoga should not be taken lightly. One teacher describes it as “an express train that shakes us up and wakes us up.” The significance of this cannot be appreciated without some understanding of the nature of Kundalini. 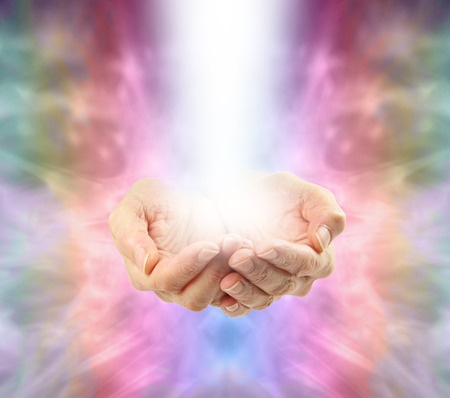 “Energy is like the wind, invisible but with visible effects such as waves on a pond stirred by a breeze.” – Chinese Proverb

Prana is the Sanskrit word for “life force,” the intelligent energy that permeates all living things—and in fact everything in the cosmos. Just like we cannot see protons and electrons, we cannot see prana, although some can feel it shifting and moving through their bodies.

The human body has a mechanism by which an enhanced flow of prana reaches the brain via the nerves in and around the spinal column, and this mechanism is called “Kundalini.” Kundalini can be thought of as an intelligent live force channeling prana around the body’s intricate network of energy highways.

The chakras are part of this energy system and are described as energy centers, or transducers, that exchange prana between the physical body and the environment. Each of the seven major chakras is said to mediate a different level of consciousness with the outer world.

Kundalini is described in the Upanishads, dating back to the fifth century B.C., although the oral tradition dates back even further.

Kundalini is known in many cultures, including Tibetan, Indian, Sumerian, Chinese, Irish, Aztec, and Greek.

Kundalini can open the doors of perception to vast realms of consciousness and is at the heart of all spiritual experiences. It also explains the wisdom of the sages. It can be enhanced to improve health, awaken creativity, and achieve inspiration. The primary goal of Kundalini Yoga is to “awaken” (or activate) Kundalini, meaning increase the amount of prana flowing to your brain. Under the right conditions, this enhanced prana can lead to higher states of consciousness such as genius, psychic abilities and mystical experiences—and at it’s highest level, enlightenment (Shaktipat).

Many believe Kundalini is key in preparing the human species for evolution. The father of Kundalini research Gopi Krishna is quoted to have said:

“Kundalini is a manifestation of a cosmic evolutionary energy that is biologically based in the human body and capable of transforming the nervous system and brain so they can support expanded levels of consciousness.”

When Kundalini Awakens Too Quickly

The goal of Kundalini Yoga is to awaken Kundalini and help you learn how to modulate it, i.e., turn it up or down at will. If Kundalini awakens too quickly, such as through very intensive meditation or yoga practice, an individual may experience spontaneous Kundalini “episodes,” which can be emotionally challenging and even manifest as what might be mistakenly diagnosed as “mental illness.” This results from heightened brain and nervous system sensitivity. If you begin a Kundalini Yoga practice, it’s important to proceed slowly, being mindful of any uncomfortable feelings or mental states that may arise.

Many physical symptoms and illnesses are manifestations of disrupted energy flow in the body. When done correctly, Kundalini Yoga is powerful medicine capable of producing widespread healing of both physical and emotional issues.

In Part 2 of this series, we will explore the evidence for Kundalini Yoga’s health benefits, looking first at how disorders—PTSD, addictions, dementia and many others—can be viewed as disruptions in Kundalini. We will also examine what the latest neuroscience and brain imaging technology reveal about how meditation, mysticism, and spirituality fundamentally change the brain. These discoveries are so profound that they have given birth to an entirely new branch of science called “neurotheology.”

Valerie Burke, MSN is a Clinical EFT practitioner and freelance health writer in Olympia, Washington, with backgrounds in both allopathic and integrative medicine and a Master’s Degree in Nursing Science. Her areas of interest include nutrition and energy psychology, and integrating principles of holistic health to create balance in mind, body a spirit. Valerie is the author of “ Is the Paleo Diet Right for You? ” You can learn more about her at www.valerieburke.net .