Intricate portals move into activation in the next few years, as the planet is being revamped and revitalized. Therefore there are massive fractures in earth crust and with it the inner stirring of mass liquid mass, which will bring about volcanic activity, even in those volcanoes which have been dormant for some time and with the eruptions in the inner earth, as liquid mass explodes this will cause earth eruptions, earth quakes and in some cases the sea will start boiling.

It is therefore imperative for mankind to understand that as the earth is reinventing herself, so human beings are being reinvented as they too are being re-formed, reinvented and even their physical bodies will now be more crystalline in nature and therefore contain higher frequency bands. 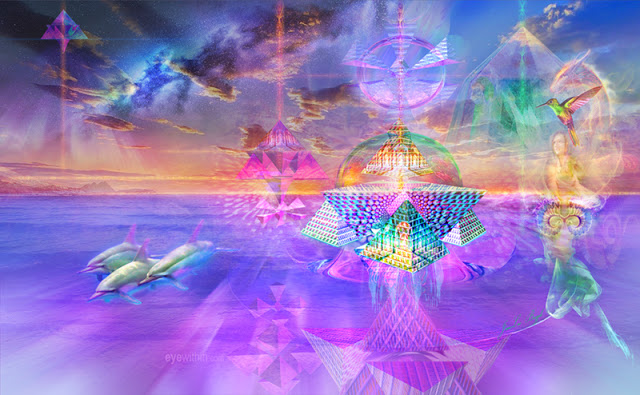 Most human beings are not aware of the energy centers in their own bodies, nor are they aware that a lot of changes are happening in the way the chakras and the spinal cord energies now move into higher octaves of being.

A lot of discomfort in the body is not caused so much by what we human being term “DIS-EASE” but rather by blocked particles of energies within these centers and therefore now are being worked on galactically to prepare mankind for the massive shifts with the portals opening up.

It is known to the Intergalactic Federation of Light, that the human body will have to be readjusted immensely, as the portal energies open up, as the normal human is not consciously aware enough to know about energies and energy centers and are not consciously seeking to activate these, do not work on the daily cleansing and clearing process, the healing of the emotional body, and more than this the healing of the mental body as well.

BOTH the emotional and mental bodies need to be healed and in balance with each other, as the last 26 000 year cycle has separated the heart (emotion/feeling) from the mind (rational, dissecting, fixing, creating/inventing without love or feeling).

Most people concentrate on the balance between the masculine and feminine WITHIN, but fail to understand the importance of the balance of heart and mind. One cannot step into full co-creatorship without there being balance between the heart and mind, between the feelings and rational, for if the heart is not fully opened up and the vital energy flow of Love is not in balance with the mind, one is imbalanced and it was imbalance which caused mass trauma since the fall of Atlantis.

When the heart energies and mind energies, are in balance with each other, a state of balance reigns within and without: – One starts then creating within the Universal Laws, as one applies them in HARMONY with the balance reigning elsewhere in the cosmos.

There are higher energy centers which work on the higher 36 chakras which were shut down after the fall of Atlantis, because human beings went out of control when the mind ruled and created the chaos that sunk Atlantis. It was done as the 3rd dimensional form of the lower DENSER physical form, could not hold the immensely high vibrational frequency which the opening up of 48 chakras would entail.

In the previous civilizations before Atlantis 72 chakras were fully opened up which meant that they lived in a much higher frequency band and therefore their physical forms where of much higher light body form. In Atlantis this was shrunk to 43 (12 + 36) and after Atlantis this further shrunk to 7 only. There are 330 chakras in all, and the more one activated the higher chakras the more one evolves by octaves of Being.

It speaks for itself then how far mankind has sunk into the sea of density and forgetfulness.

Take this one step further, and it was known that together with the chakras, the nadis and meridians, the 33 Vortex energy centers held within the spinal column had to be fully cleansed, healed and activated. It was known that each vertebrae, held soul memory banks and only in releasing these soul memory banks could such a center be fully activated. Each vertebrae acts like a mini computer chip, and records all that is held in the emotional and mental bodies.

Unless each vertebrae is treated like living entity in its own right and higher Adam Kadmon body cannot function nor can it be fully activated. There is more to the spinal column here, than I will divulge now, but to confuse this energy with the Kundalini energy is to play down the importance of these energy centers.

The Kundalini rises yes, through center energy channels in the spinal column, however it is but one single energy force, and not the whole. It is but cog in the Universal wheel – not the be-all and end-all as some would have it be. Again, forgetfulness and the wrong interpretation of ancient scripts and the handing down orally of teachings, has left immense gaps in human knowledge and understanding of vital truths.

As mankind sunk into forgetfulness a lot of the teachers, could not understand the greater whole, and therefore started sharing only what they knew and could understand. What went beyond their own understanding they could not teach. They might have handed down certain texts, or what was recorded in such, but the earliest civilizations recorded such not in the form of writing, but in the form of ENERGY.

As the human body is this massive and very sensitive energy field, in combination with the emotional, mental, spiritual and all twelve lightbodies, so is the earth. Every single aspect of the human body reflects within the body of the earth. She is as much a living, breathing entity as we are – it is just that we tend to forget that.

To me the earth changes and the opening up of the portals brings in a higher understanding of just how linked our physical forms are to planet earth. But not only our physical forms and the rest of our bodies are linked – OUR CONSCIOUSNESS LEVELS ARE ALSO LINKED THE PLANET’S!

AS ABOVE – SO BELOW.

Most people are not even aware of the earth’s energies, let alone the cosmic ones: -The walking, living, sleeping dead. They will not be able to hold the higher frequency bands as the earth moves more and more into higher activation and with it shifts into higher cosmic frequency gear.

It is not only human beings who will not be able to hold their physical forms anymore as this happens, the same applies to animal and plant life – indeed any living organism.

It is the dying of the Old Adam and Eve and the birth of the new human race.

It is the dying of the Old planet Earth and the birth of the New EARTH.

It is the dying of some parts of the Milky Way Galaxy and the birthing of a new galaxy now being born.

We are in the process of a massive COSMIC rebirthing, revamping process and therefore should not fear the changes, but rather embrace them! Whether these are earth changes or bodily changes or a total clean-up of our emotional, mental and spiritual bodies – and all the rest.

One only fears what one is not consciously aware and part of.

Our souls are intricately linked to the Central Suns and to the Divine.

Our SOULS are immortal, eternal, and therefore KNOW all of this.

There is truly nothing new under the Great Central Suns!