by RE
in Health, Meditation, World Truth
0

Firmly embedded into our culture now, pharmaceutical companies create so-called cures and treatments for every human condition, and modern psychiatry has become an institution that works to create lifelong dependencies on medications to help people adapt to the stress of modern life and to conform to the rigid corporate/consumer culture that has come to be known as life.

Attention deficit hyperactivity disorder ( ADHD ) has become an industry in and of itself, and it is huge. 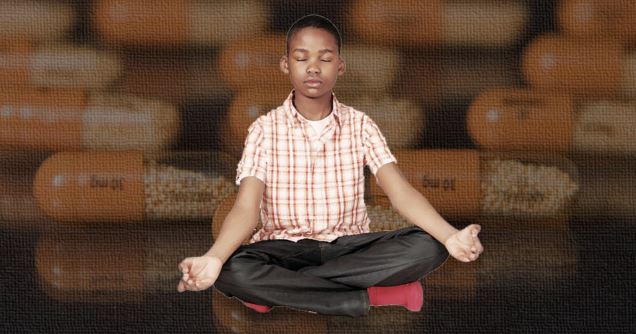 Attention deficit hyperactive disorder is big business. That’s the conclusion of a new report, published by the market research firm IBISWorld, which showed that ADHD medication sales have grown 8 percent each year since 2010 and will grow another 13 percent this year [2015] to $12.9 billion. Furthermore, it projects this growth will continue over the next five years at an annualized rate of 6 percent, and take in $17.5 billion in the year 2020—making it one of the top psychopharmaceutical categories on the market. [Source]

The pharmaceutical industry profits by changing people’s perceptions of what health is, then training them to believe that pills offer the most practical and convenient solution. This applies as much to statin drugs , painkillers and diabetic treatments as it does to psychiatric and psychotropic medications. The result is a nation of medication dependent people who have no idea to heal themselves naturally, and an ever-increasing corporate profit stream for pharmaceutical companies.

There is a ton of money being made selling ADHD medications to people of all walks of life, but much of the growth in this industry is in prescribing these drugs to children, sometimes even to toddlers .

The truth about ADHD is that to many prestigious physicians it is nothing more than a fictitious ‘disorder,’ something that describes a varying set of symptoms, contrived by the American Medical Association .

“…after 50 years of practicing medicine and seeing thousands of patients demonstrating symptoms of ADHD, I have reached the conclusion there is no such thing as ADHD.” ~Dr Richard Saul

Over diagnosis is now commonplace even though some are beginning to acknowledge that the medications often prescribed for ADHD are chemically identical to speed , or methamphetamine, a class I illegal street drug. In the case of Adderall, Dr. Carl Hart has explained that this is in fact the case, and the explosion in recreational use of these drugs has many agreeing that ADHD medications are the real ‘gateway drug’ to addiction , not cannabis , as popular drug war propaganda would have us believe.

But what if there were away to improve the behavior, mood, and concentration levels of people with symptoms similar to those described as ADHD? What if this treatment was free and led to many improvements in the patient’s life, including increased happiness, confidence and spiritual wellness? What if all it took was an improved diet, exercise and training in mental focus to overcome these symptoms?

Meditation is scientifically proven to bring about many health benefits for practically anyone, and is proving to be very effective for children who have been labelled with ADHD.

The following video records the stories of several children who had been struggling with the common symptoms of ADHD and instead of taking prescription speed were given three months training in Transcendental Meditation (TM), with outstanding results.

“It’s working its improving their lives, it’s improving their sense of self, it’s empowering them… I really do see it making a big difference, and I think their futures are going to be so much brighter because of it.” ~https://www.youtube.com/watch?v=Rcy2jF1EXjk

“Researchers are finding TM may do more than just relax the children, it may actually decrease disabling aspects of ADHD.” [Source]

In this video from the David Lynch Foundation , transcendental meditation is used experimentally in Kingsbury Day School in Washington, DC, a school for children with language based learning disabilities. Twice a day the regular school program stops and the children meditate, using the TM method for just ten minutes, with incredible results, and without the use of pharmaceutical ADHD medications.

Results like these beg the question: do we have time to teach our children well, or are we so wrapped in our day-to-day lives that we’d rather medicate them into conforming so as to conveniently bring them inline with the standards and expectations of today’s stressful corporate-consumer culture? Meditation works and does wonders for children.

Alex Pietrowski is an artist and writer concerned with preserving good health and the basic freedom to enjoy a healthy lifestyle. He is a staff writer for WakingTimes.com and Offgrid Outpost , a provider of storable food and emergency kits . Alex is an avid student of Yoga and life.