Michael Jackson, aka the King of Pop, tragically lost his life in strange and nebulous circumstances in June 2009. Five years later, his image is used to generate money for a record company he hated with a passion.

Almost ironically entitled Xscape, Michael Jackson’s new posthumous album was released by Epic Records, a division of Sony Music. As I noted in the article entitled When Insiders Expose the Ugly Side of the Entertainment Industry , MJ was becoming increasingly vocal out about the evils of the music industry and was especially disgusted by Sony Music. Here’s a video of a speech he gave in 2002. As you’ll see, MJ did not like Sony nor the ex-President of the company Tommy Mottola. He explains how Motolla, Mariah Carey’s ex-husband, acted more like a MK slave handler than a husband … while holding a sign saying “$ony Kills Music”.

Fast-forward to today. Sony owns MJ’s image and uses a hologram of him to make him sing and dance at will. Years after his death, MJ truly cannot “Xscape” exploitation by the music industry. 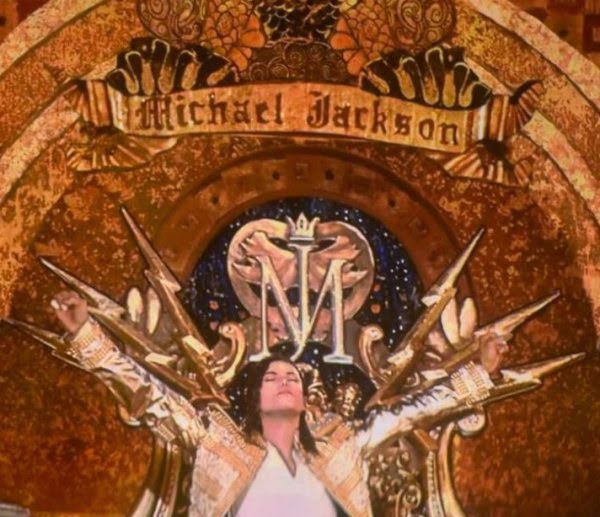 MJ’s hologram performed at the 2014 Billboard awards the song Slave to Rythm, a title that sadly captures his fate with the music business. Even worse, the set is full of the symbolism of the occult elite he tried to escape from.

The “performance” begins with a group of policemen dressed in riot gear. Complete with oppressive helicopters and spotlights, the intro is yet another example of the music business turning the concept of an oppressive police state into something normal and fashionable. It also tells us that this MJ “performance” was brought to you by the occult elite. 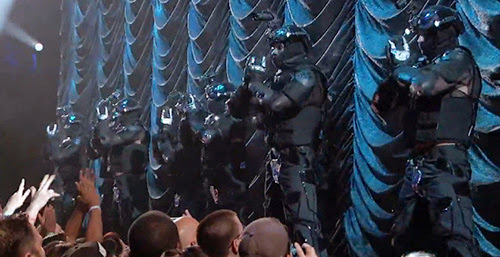 MJ is introduced by a bunch of police dressed in riot gear – a continuation of the police
state agenda that prevails in the music business.

When then see a weird, computer-generated clone of MJ sitting on a throne (of lies). The animal print on the throne might refer to Beta MK programming – something he probably experienced in his youth. 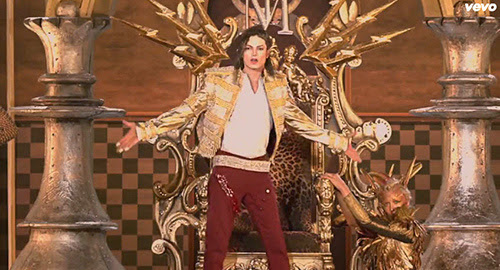 Then things become extremely Masonic. The entire background behind MJ turns
into a checkerboard pattern – as used on the ritualistic floor of Masonic lodges. 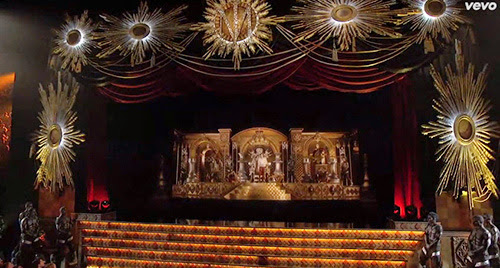 In fact, the entire stage is basically one big Masonic lodge, complete with twin pillars
(formed by chess pieces), an arch above them and checkerboard patterns.
All of this is surrounded by “blazing stars”. 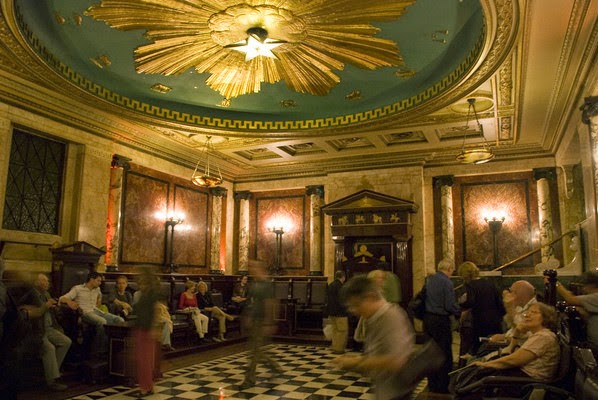 A Masonic lodge at Andaz Hotel in London. Checkerboard floor, twin pillars and a giant blazing star on the ceiling. 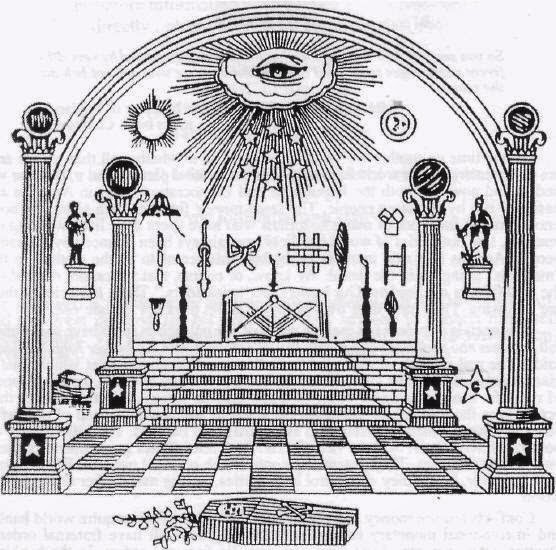 Many of the symbols found in this Masonic image are found in the hologram “performance”.

The clone then proceeds to emulate MJ’s signature dance moves – causing the same foul gut feeling as one would get while watching a corpse being animated with puppet strings. 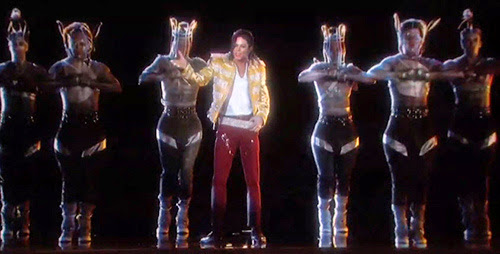 Some of MJ’s backup dancers wear cages around their heads, telling viewers that
artists in the Illuminati industry are literal “slaves to the rhythm”.

Then fake-MJ sits back down on his throne (of lies). People in the audience start clapping and cheering while probably realizing that there is no human being on the stage to acknowledge these cheers.

Some might say that “people miss Michael” and that the hologram performance “brings back his magic”. Maybe so. But the reality is that MJ’s image and legacy is being hijacked by the industry he grew up to hate. His image is now used to promote the Illuminati Agenda and to generate revenues for Sony Music. Would MJ approve of any of this? Maybe the following picture will answer that question. 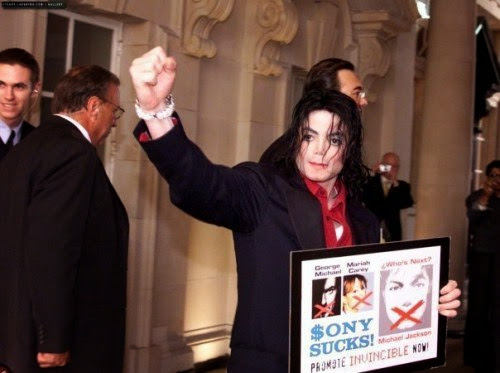