by RE
in Conspiracy, Depopulation, GMO
0

Editor’s Note: There’s little doubt left that the effects of using glyphosate and cultivating GMOs at an accelerating rate is causing harm – not only to the health of individuals and the environment, but to the independence of farming practices, the economy and the larger food supply. At a minimum, the precautionary principle should be applied, and people should have enough information – via labels, etc – to avoid these foods if they wish.

Monsanto, the world’s largest genetically modified (GM/GMO) seed producer, has been at the centre of controversy for decades as evidence of the harmful effects on humans of GM foods continues to mount. Joined with the likes of DuPont’s Pioneer Hi-Bred International and Syngenta, Monsanto and partners comprise the corporate nexus of Big-Agri, where the control over our food supply is increasingly transferred into the hands of private trans-national corporations as opposed to local farmers and governments. 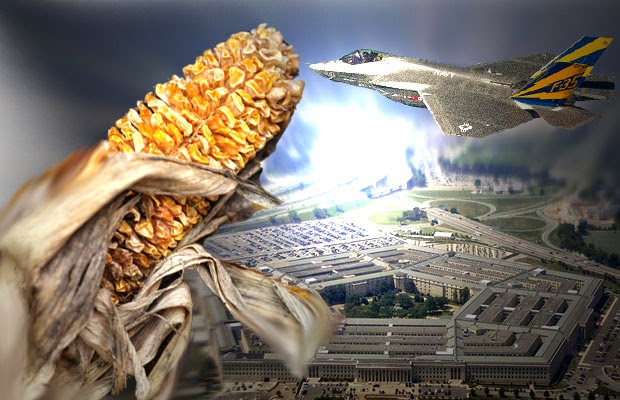 A US peer-reviewed study conducted last year which was published in the scientific journal Entropy, linked Monsanto’s herbicide Roundup – which is the most popular weed killer in the world – to infertility, cancers and Parkinsons Disease amongst other ailments. The authors of the study were Stephanie Seneff, a research scientist at the Massachusetts Institute of Technology, and Anthony Samsel, a retired science consultant from Arthur D. Little, Inc. and a former private environmental government contractor. The main ingredient in Roundup is the “insidious” glyphosate, which the study found to be a deeply harmful chemical:

“Glyphosate enhances the damaging effects of other food borne chemical residues and environmental toxins. Negative impact on the body is insidious and manifests slowly over time as inflammation damages cellular systems throughout the body…….Consequences are most of the diseases and conditions associated with a Western diet, which include gastrointestinal disorders, obesity, diabetes, heart disease, depression, autism, infertility, cancer and Alzheimer’s disease” ( Samsel and Seneff, 2013 ).

The Executive Director of the Institute for Responsible Technology (IRT) Jeffrey M. Smith has discovered a link between gluten disorders and GM foods in a study he conducted last year. Gluten disorders have sharply risen over the past 2 decades, which correlates with GM foods being introduced into the food supply. Smith asserts that GM foods – including soy and corn – are the possible “environmental triggers” that have contributed to the rapid increase of gluten disorders that effect close to 20 million American’s today:

One of the more damming studies on the safety of GM foods was led by biologist Dr. Gilles-Eric Seralini of the University of Caen, which was the first study to examine the long term affects on rats that had consumed Monsanto’s GM corn and its Roundup herbicide. The study was conducted over a 2 year period – which is the average life-span of a rat – as opposed to Monsanto’s usual period of 90 days. The peer-reviewed study found horrifying effects on the rats health, with a 200% to 300% increase in large tumours, severe organ damage to the kidney and liver and 70% of female participant rats suffered premature death. The first tumours only appeared 4 to 7 months into the research, highlighting the need for longer trials.

Initially the study was published in the September issue of Food and Chemical Toxicology, but was then later retracted after the publisher felt the study was “inconclusive”, although there was no suspicion of fraud or intentional deceit. Dr. Seralini strongly protested the decision and believed “economic interests” were behind the decision as a former Monsanto employee had joined the journal. Monsanto is infamous for employing swaths of lobbyists to control the political, scientific and administrative decisions relating to the organisation, and this incident was a major whitewash by the GM producer to stop the barrage of negative media reports relating to the toxic effects of their products. The study led by Dr. Seralini was later published in a less well renowned journal, the Environmental Sciences Europe, which reignited the fears of GM foods safety.

France has recently implemented a ban on Monsanto produced maize (MON810) – a different variety of the Monsanto GM corn that was discussed in the study above (NK603) – citing environmental concerns as the reason for the ban. France joins a list of countries including Italy and Poland who have imposed bans on GM corn over the past few years. Additionally, Russian MPs have introduced a draft into parliament which could see GM producers punished as terrorists and criminally prosecuted if they are deemed to have harmed the environment or human health. In India, many of the GM seeds sold to Indian farmers under the pretext of greater harvests failed to deliver, which led to an estimated 200,000 Indian farmers committing suicide due to an inability to repay debts.

There is growing evidence to support the theory that bee colonies are collapsing due to GM crops being used in agriculture, with America seeing the largest fall in bee populations in recent years. Resistance to Monsanto and GM foods has been growing in recent years after the launch of the worldwide ‘ March Against Monsanto ’ in 2012, which organises global protests against the corporation and its toxic products within 52 countries. Monsanto was also voted the ‘ most evil corporation ’ of 2013 in a poll conducted by the website Natural News, beating the Federal Reserve and British Petroleum to take the top position.

Researching Monsanto’s past reveals a very dark history that has been well documented for years. During the Vietnam War, Monsanto was contracted to produce and supply the US government with a malevolent chemical for military application. Along with other chemical giants at the time such as Dow Chemical, Monsanto produced the military herbicide Agent Orange which contained high quantities of the deadly chemical Dioxin. Between 1961 and 1971, the US Army sprayed between 50 and 80 million litres of Agent Orange across Vietnamese jungles, forests and strategically advantageous positions. It was deployed in order to destroy forests and fertile lands which provided cover and food for the opposing troops. The fallout was devastating , with Vietnam estimating that 400,000 people died or were maimed due to Agent Orange, as well as 500,000 children born with birth defects and up to 2 million people suffer from cancer or other diseases. Millions of US veterans were also exposed and many have developed similar illnesses. The consequences are still felt and are thought to continue for a century as cancer, birth defects and other diseases are exponential due to them being passed down through generations.

Today, deep connections exist between Monsanto, the ‘Military Industrial Complex’ and the US Government which have to be documented to understand the nature of the corporation. On Monsanto’s Board of Directors sits the former Chairman of the Board and CEO of the giant war contractor Lockheed Martin, Robert J. Stevens , who was also appointed in 2012 by Barack Obama to the Advisory Committee for Trade Policy and Negotiations. As well as epitomising the revolving door that exists between the US Government and private trans-national corporations, Stevens is a member of the parallel government in the US, the Council on Foreign Relations (CFR). A second board member at Monsanto is Gwendolyn S. King , who also sits on the board of Lockheed Martin where she chairs the Orwellian ‘Ethics and Sustainability Committee”. Individuals who are veterans of the corporate war industry should not be allowed control over any populations food supply! Additionally, Monsanto board member Dr. George H. Poste is a former member of the Defense Science Board and the Health Board of the U.S. Department of Defense, as well as a Fellow of the Royal Society and a member of the CFR .

Bill Gates made headlines in 2010 when The Bill and Melinda Gates Foundation bought 500,000 Monsanto shares worth a total of $23 million, raising questions as to why his foundation would invest in such a malign corporation. William H. Gates Sr. – Bill’s father – is the former head of Planned Parenthood and a strong advocate of eugenics – the philosophy that there are superior and inferior types of human beings, with the inferior type often sterilised or culled under the pretext of being a plague on society. During his 2010 TED speech , Bill Gates reveals his desire to reduce the population of the planet by “10 or 15 percent” in the coming years through such technologies as “vaccines”:

“The world today has 6.8 billion people. That’s heading up to about 9 billion. Now if we do a really good job on new vaccines, health care, reproductive health services, we could lower that by perhaps 10 or 15 percent” (4.37 into the video).

In 2006, Monsanto acquired a company that has developed – in partnership with the US Department of Agriculture – what is popularly termed terminator seeds, a future major trend in the GM industry. Terminator Seeds or suicide seeds are engineered to become sterile after the first harvest, destroying the ancient practice of saving seeds for future crops. This means farmers are forced to buy new seeds every year from Big-Agri, which produces high debts and a form of servitude for the farmers.