by Mark Molloy
The Telegraph

The green object was captured by a Nippon TV affiliate weather camera in eastern Japan and released by NHK to add to the spooky sightings on Halloween night.

So have the little green men from outer space been captured on camera? Astronomers believe they might have a more normal explanation for the emerald green ‘orb’. 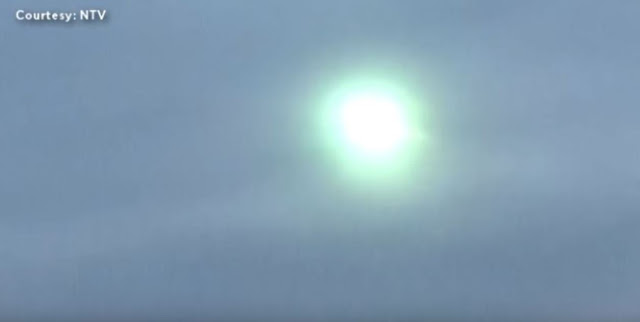 An astronomer told NBC the bright lights could be a very bright meteor known as a ‘fireball’.

“A fireball is another term for a very bright meteor, generally brighter than magnitude -4, which is about the same magnitude of the planet Venus in the morning or evening sky,” explains the American Meteor Society .

“A bolide is a special type of fireball which explodes in a bright terminal flash at its end, often with visible fragmentation”

The astronomer also suggested the green light could have been space debris re-entering the atmosphere, however no evidence has been found on the ground, the BBC reports.

Malcolm Robinson, a founder member of Strange Phenomena Investigations (SPI), believes there is a normal explanation for 95 per cent of UFO sightings.

“We are only talking about a small 5 per cent that can’t be explained and three per cent of the five could be our own black budget technology,” he explained at a recent talk on UFOs.