by RE
in Health, Meditation, Spirituality
0

Science is now catching up to the knowledge outlined in the Vedas, Yoga Sutras of Patanjali, and other ancient texts. For approximately 5,000 years people have been practicing meditation, proving the positive impact it can have on the body and mind. Science has now accepted that meditation can have powerful effects on human health, as more research is exposing these mind-blowing benefits. Some experienced meditators have even been referred to as “superhumans” because of how their practice has affected them (check out our article here ). A study recently published in Translational Psychiatry proved just how beneficial meditation can be for human health, as the molecular signature of meditators was found to be significantly different from those who don’t meditate on a regular basis.

How Meditation Can Improve Your Cellular Health 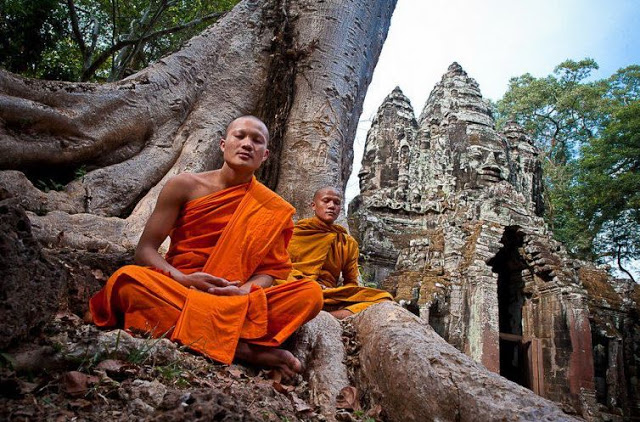 A group of American researchers performed a study on participants at a 5-day retreat offered regularly by Deepak Chopra’s infamous Chopra Center for Wellbeing (Carlsbad, CA, USA) at the vacation resort OMNI La Costa Resort and Spa. Researchers invited women between the ages of 30 and 60 who did not have experience meditating to participate in the study and then divided them into two groups: those who would participate in the retreat (“novice meditators”) and those who would simply stay at the resort (“vacationers”).
Researchers compared their results against each other and also to those of women already enrolled in the retreat who were in the same age bracket and meditated regularly (“regular meditators”). The participants’ health was examined before and after five days of staying at the resort and then maintenance assessments were completed one month and 10 months later.

Standard psychological measures were used to determine participants’ depression symptoms and perceived levels of stress, mindfulness, and vitality. Participants also had their blood drawn on days one and five of the study. For more information on specifics of the blood draw, processing, biomarker assays, and RNA sequencing of blood samples, click here .

Although all three groups experienced significant improvements in mental health, novice meditators showed much greater improvements in regards to depression in comparison to the vacationers, especially at the 10-month marker. It is clear from these findings that short-term vacation effects improve well-being; however, it is evident that there are long-term benefits from learning meditation as well.

While on vacation, genes that are typically required for dealing with stress, wound healing, and injury are down-regulated. Among the ones that were down-regulated post retreat/vacation were MME and FOXO3, both of which are referred to as stress-related genes. This study is believed to be the first documentation that a stress reduction intervention can decrease FOXO3 expression.

Researchers also identified what they referred to as a “meditation effect,” whereby the regular meditators were found to have a distinct network of genes with cellular functions that may be associated with anti-aging. Even though a vacation often benefits the expression of gene networks in regards to well-being, the “vacation effect” cannot be sustained throughout life because you cannot go on vacations all of the time. In contrast, the “meditation effect” can actually be sustained if you’re practicing meditation regularly, so you can continuously reap the rewards.

You can read the full study here .

More Studies Proving Meditation Can Better Your Body and Mind

A study conducted by Harvard University determined that meditation rebuilds the brain’s grey matter in only eight weeks. This incredible discovery was made by taking magnetic resonance images (MRIs) of the 16 participants’ brains both two weeks before the study and after it was completed.

Another Harvard study found that meditation can even mitigate symptoms of Irritable Bowl Syndrome (IBS) and improve gut health. The study showed that by inducing the “relaxation response,” which is essentially the scientific term for meditation, participants showed reduced symptoms of IBS as well as decreased anxiety and overall better quality of life.

You can read more about these two studies in our article here , and read how meditation drastically improved a CE team member’s IBS here .

If you’re unfamiliar with meditation, keep an open mind and know that it truly is a practice meant for everyone. There is no skill involved, it is simply the act of silencing the mind and finding inner peace. Remember, it is not about stopping thoughts from happening in the first place; it is about letting them pass, without judgement or attachment.

It is said that Buddha was once asked, “What have you gained from meditation?” To which he responded, “Nothing! However, let me tell you what I lost: anger, anxiety, depression, insecurity, fear of old age and death.”