Respected Analyst Says GMOs Could Destroy Life on the Planet

Invoking the risk of famine as a justification for GMOs is “a deceitful strategy, no different from…Russian roulette,” according to a statistician and professor at New York University.

Nassim Nicholas Taleb is a scholar, statistician, Wall Street analyst and advisor, professor at New York University, and the bestselling author of Fooled by Randomness and The Black Swan: The Impact of the Highly Improbable. He predicted the 2008 financial crisis by pointing out that commonly used risk models were wrong. (He was correct, and he became quite wealthy from the strategic financial decisions he made at that time.)

Now his analysis of our use of genetically modified organisms shows that GMOs could cause “an irreversible termination of life at some scale, which could be the planet.” Taleb and his two co-authors argue that calling the GMO approach “scientific” betrays “a very poor–indeed warped–understanding of probabilistic payoffs and risk management.” 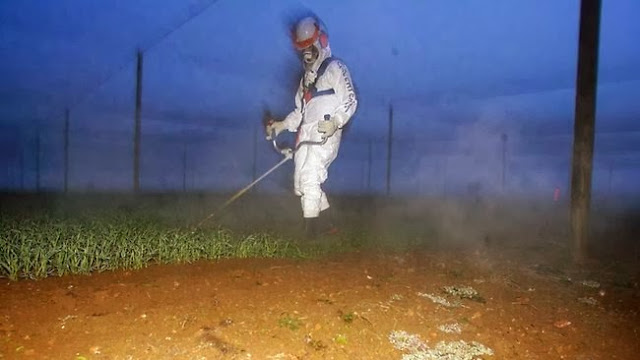 Taleb believes GMOs fall squarely under the rule that we should always err on the side of caution if something is really dangerous. This is not just because of potential harm to the consumer, but because of systemic risk to the system, which in this case is the ecosystem that supports all life on the planet:

Top-down modifications to the system (through GMOs) are categorically and statistically different from bottom-up ones (regular farming, progressive tinkering with crops, etc.). There is no comparison between the tinkering of selective breeding and the top-down engineering of arbitrarily taking a gene from an organism and putting it into another. 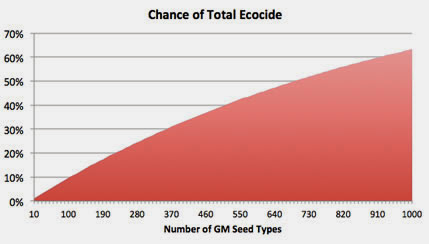 The interdependence of all things in nature, Taleb points out, dramatically amplifies risks that may initially seem small when studied in isolation. Tiny genetic errors on the local scale could cause considerable–and even irreversible–environmental damage when the local is exported to the global. The lack of understanding of basic statistical principles, he says, is what leads GMO supporters astray:

The problem is that the general public, and indeed most policy analysts, are ill-equipped to understand the statistical mathematics of risk. But as Brian Stoffel explains in his helpful article on Taleb’s research , we can assume that each genetically engineered seed carries a risk–albeit a very tiny risk–that in the intricately interdependent web of nature, the GMO seed might somehow eventually lead to a catastrophic breakdown of the ecosystem we rely on for life. Let’s call it a 0.1% chance, just for the sake of illustration. All by itself, that risk seems totally acceptable. But with each new seed that’s developed, the risk gets greater and greater, and over time, we could hit “the ecocide barrier”:

Critics say, “But risk is inherent in everything. We can’t just be paralyzed by fear and not progress!” Taleb responds that the risk of “generalized human extinction” is absolutely not “inherent in everything.” That’s because most consequences are localized, not systemic. And progress can be made using bottom-up techniques that have worked for eons.

While quite a few countries have banned GMOs because of their risk to human health and the environment, the US lags behind. Politicians complain that we don’t have the full picture on GMOs and therefore shouldn’t ban them–but that’s because of the lack of human safety studies being performed on GMOs in the US, and because GM companies keep a lot of their data proprietary , that is, concealed from the public. Consider the implications of keeping it secret: if the research finds GMOs to be harmless, wouldn’t that be something you’d want to shout from the rooftops, if you were Monsanto?

Genetic engineering is 40 years old. It is based on the naive understanding of the genome based on the One Gene – one protein hypothesis of 70 years ago, that each gene codes for a single protein. The Human Genome project completed in 2002 showed that this hypothesis is wrong.

The whole paradigm of the genetic engineering technology is based on a misunderstanding. Every scientist now learns that any gene can give more than one protein and that inserting a gene anywhere in a plant eventually creates rogue proteins. Some of these proteins are obviously allergenic or toxic.

There are no long-term feeding studies performed in any country to demonstrate the claims that genetically engineered foods are safe. All we have are scientific studies out of Europe and Russia, showing that rats fed engineered food die prematurely.

These studies show that proteins produced by engineered plants are different than what they should be. Inserting a gene in a genome using this technology can and does result in damaged proteins. The scientific literature is full of studies showing that engineered corn and soya contain toxic or allergenic proteins.

There is, clear evidence that GMOs pose risks (such as increased herbicide use) that could easily destabilize ecosystems, pose grave dangers to human health, and all without much benefit to the farmer or indeed anyone but the manufacturer:

A fact sheet on GMO risks offers much more evidence of ecological harm.

Just last spring, an amendment inserted into the 2013 Farm Bill passed by the House of Representatives’ Agriculture Committee would revoke the ability of individual states’ lawmakers to pass GMO-labeling laws, food advocates warned.

Earlier this year Mexico placed an indefinite ban on genetically-engineered corn , banning companies like Monsanto and DuPont/Pioneer from planting or selling their corn within the country’s borders.

A month earlier the Russian Prime Minister ordered agencies to consider a possible ban on all GMO imports into Russia .

Denmark has also imposed widespread bans on the spraying of glyphosate in response to research showing that the sprays have been contaminating the countrys groundwater.

In the United States, it now appears that Hawaii is at the forefront in the anti-GMO movement, a proliferation of organized regions across the country committed to banning and eradicating GMOs from the food supply.