Scientists Discover What Meditation Does To Your Gut &amp; Your Brain

Numerous studies have indicated the many physiological benefits of meditation, and the latest one comes from Harvard University.

“Although the practice of meditation is associated with a sense of peacefulness and physical relaxation, practitioners have long claimed that meditation also provides cognitive and psychological benefits that persist throughout the day. This study demonstrates that changes in brain structure may underlie some of these reported improvements and that people are not just feeling better because they are spending time relaxing.” – ( 1 ) Sara Lazar of the MGH Psychiatric Neuroimaging Research Program and a Harvard Medical School Instructor in Psychology 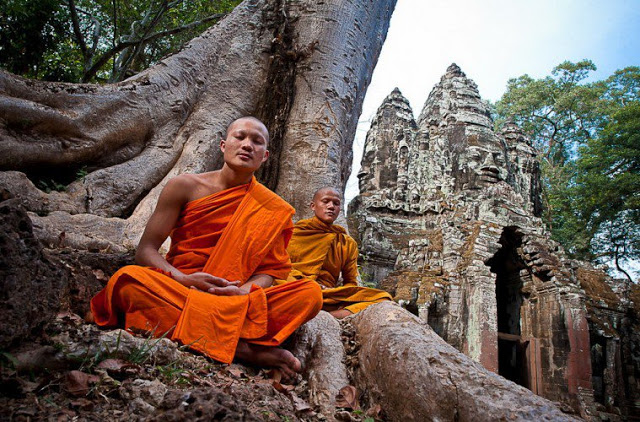 The study involved taking magnetic resonance images (MRI) of the brain’s of 16 study participants two weeks prior to participating in the study. MRI images of the participants were also taken after the study was completed.

“The analysis of MR images, which focused on areas where meditation-associated differences were seen in earlier studies, found increased grey-matter density in the hippocampus, known to be important for learning and memory, and in structures associated with self-awareness, compassion and introspection.” ( 1 )

For the study, participants engaged in meditation practices every day for approximately 30 minutes. These practices included focusing on audio recordings for guided meditation, non-judgmental awareness of sensations, feelings and state of mind.

“It is fascinating to see the brain’s plasticity and that, by practicing meditation, we can play an active role in changing the brain and can increase our well-being and quality of life. Other studies in different patient populations have shown that meditation can make significant improvements in a variety of symptoms, and we are now investigating the underlying mechanisms in the brain that facilitate this change.” – ( 1 ) Britta Holzel, first author of the paper and a research fellow at MGH and Giessen University in Germany

Researchers from Harvard have also released another study showing that meditation can have a significant impact on clinical symptoms of gastrointestinal disorders, irritable bowel syndrome (IBS) and inflammatory bowel disease (IBD). The study showed that elicitation of the relaxation response (a physical state of deep rest that changes the physical and emotional responses to stress) is a very big help.

The study comes out of the Benson-Henry Institute for Mind Body Medicine at Massachusetts General Hospital (MGH) and Beth Israel Deaconess Medical Center (BIDMC). This is the very first study where the use of the “relaxation response” was examined in these disorders, and the first to investigate the genomic effects of the relaxation response in individuals with any disorder. The report was published in the journal PLOS-ONE. ( source )

“Our results suggest exciting possibilities for further developing and implementing this treatment in a wider group of patients with gastrointestinal illness. Several studies have found that stress management techniques and other psychological interventions can help patients with IBS, at least in the short term; and while the evidence for IBD is less apparent, some studies have suggested potential benefits. What is novel about our study is demonstration of the impact of a mind/body intervention on the genes controlling inflammatory factors that are known to play a major role in IBD and possibly in IBS.” – Brandon Kuo of the gastrointestinal unit in the MGH Department of Medicine, co-lead author of the report. ( source )

For those of you who are unaware, IBS and IBD are chronic conditions that produce similar symptoms which include; abdominal pain, and changes in bowel function, like diarrhea. IBD also includes ulcerative colitis and Crohn’s disease, which leads one to suffer from severe inflammation in all or part of the gastrointestinal tract. Science has shown us that stress intensifies these symptoms, which is why this study regarding meditation and these diseases holds a great deal of importance.

The relaxation response has been subject to several studies that clearly show that its regular practice (induced by meditation) directly affects physiologic factors such as oxygen consumption, heart rate, blood pressure and again, stress and anxiety. It was first described over 40 years ago by Herbert Benson, director emeritus of the Benson-Henry Institute and co-author of the paper presented in this article.

The study had 48 adult participants, with 19 of them being diagnosed with IBS and 29 with IBD. There was weekly relaxation response training, as well as in their home for 15 t0 20 mintues each day.

The study enrolled 48 adult participants — 19 of whom had been diagnosed with IBS and 29 with IBD — who participated in a nine-week group program focused on stress reduction, cognitive skills, and health-enhancing behaviors. Each of the weekly sessions included relaxation response training, and participants were asked to practice relaxation response elicitation at home for 15 to 20 minutes each day. Along with aspects featured in other group programs offered at the Benson-Henry Institute, this program included a session specifically focused on gastrointestinal health.

“Both in patients with IBS and those with IBD, participation in the mind/body program appeared to have significantly improved disease-related symptoms, anxiety, and overall quality of life, not only at the end of the study period but also three weeks later. While there were no significant changes in inflammatory markers for either group of participants, changes in expression were observed in almost 200 genes among participants with IBS and more than 1,000 genes in those with IBD. Many of the genes with altered expression are known to contribute to pathways involved with stress response and inflammation.” ( source )

A common misconception about meditation is that you have to sit a certain way or do something in particular to achieve the various benefits that it can provide. All you have to do is place yourself in a position that is most comfortable to you. It could be sitting cross legged, lying down in a bed, sitting on a couch etc, it’s your choice.

Another common misconception about meditation is that you have to “try” to empty your mind. One important factor I enjoyed reading from the study mentioned above is that participants were engaged in “non-judgmental awareness of sensations, feelings and state of mind.” When meditating, you shouldn’t try to “empty” your mind. Instead, try to let your thoughts, feelings and whatever emotions you are feeling at the time flow. Don’t judge them, just let them come and go and be at peace with it.

I also believe that meditation is a state of being/mind more than anything else. I feel that one does not have to sit down for half an hour and “meditate” so to speak in order to reap the benefits of it, or to be engaged in the practice itself. One can be engaged in meditation while they are on a walk, for example, or the time they have right before they sleep. Throughout the day, one can resist judging their thoughts, letting them flow until they are no more, or just be in a constant state of peace and self awareness. Contrary to popular belief, there is more than one way to meditate.