by RE
in Human Aura, Human Spirit
0

I recently came across an article that I thought was interesting enough to share, and I think I may be able to provide proper scientific support for these claims for the very first time ever by presenting the original published study. The timing of astral disembodiment in which the spirit leaves the body has allegedly been captured by Russian scientist Konstantin Korotkov, who photographed a person at the moment of his death with a bioelectrographic camera.

The image taken using the gas discharge visualization method , an advanced technique of Kirlian photography, shows in blue the life force of the person leaving the body gradually.

According to Korotkov, navel and head are the parties who first lose their life force (which would be the soul) and the groin and the heart are the last areas where the spirit before surfing the phantasmagoria of the infinite. 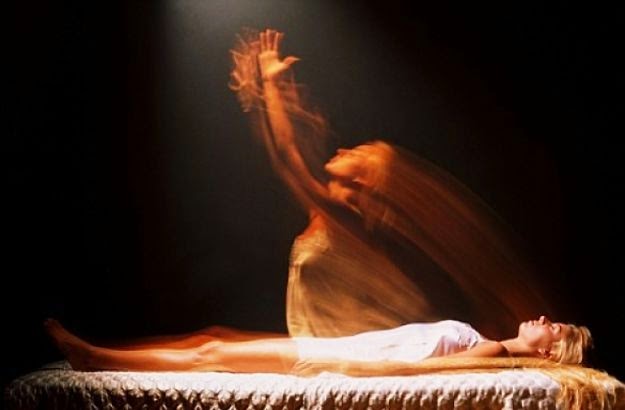 In other cases, according to Korotkov, the “the soul” of people who suffer a violent and unexpected death usually manifests a state of confusion in your power settings and return to the body in the days following death. This could be due to a surplus of unused energy. 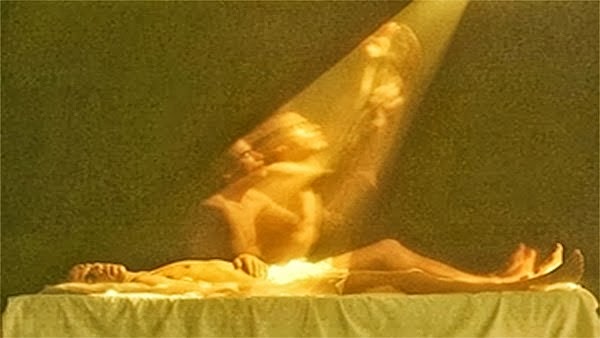 The technique developed by Korotkov, who is director of the Research Institute of Physical Culture, St. Petersburg, is endorsed as a medical technology by the Ministry of Health of Russia and is used by more than 300 doctors in the world for stress and monitoring progress of patients treated for diseases such as cancer. Korotkov says his energy imaging technique could be used to watch all kinds of imbalances biophysical and diagnose in real time and also to show if a person does have psychic powers or is a fraud.

This technique, which measures real-time and stimulated radiation is amplified by the electromagnetic field is a more advanced version of the technology developed for measuring Semyon Kirlian aura. Here is an interview with Dr. Korotkov talking more about his practice:

Now, before we get into the good stuff, let’s consider a few things.

Dr. Korotkov is the author of more than 200 papers in leading journals on physics and biology, and he holds 17 patents on biophysics inventions. Prof. Korotkov has led a research career for over 30 years, combining rigorous scientific method with an insatiable curiosity about things of the spirit and the soul with deep respect for all life. He is also a scholar in philosophy and a serious mountaineer of 25 years experience. He has given lectures, seminars and training sessions in 43 countries, presenting papers and workshops at more than 100 national and international conferences.

If one were to question the credibility of this story, it could not be on the basis that the scientist is not credible. He is the Professor of Computer Science and Biophysics at Saint-Petersburg Federal University of Informational Technologies, Mechanics and Optics. Professor of Research in Saint Petersburg Academy of Physical Culture, and the President of the International Union for Medical and Applied Bioelectrography just to name a few.

I visited his website, and looked through the articles he has published. He has tons of papers on measuring human energy fields , the scientific measurement of the human aura , and other fascinating topics. But upon my research, I realized I stumbled upon the original paper which represents a summary of results of experimental research on post mortem evoked bioelectrographic activity of the human body on the basis of Kirlian effect. The study titled “Experimental investigations of post mortem bioelectrographic images of human fingers.” can be found HERE .

They were measuring the left over energy field of dead human bodies using GDV technology. Once an hour, they would go down to the experimental room, dry a photo-paper list (date, time), put the photo-paper under the fingers and take two gas-discharge photos onto one list, having simultaneously exposed a metal bench mark object on the same list. On the whole, in the period of two years 26 experimental sessions were put into practice, each of which took from three to five days. Among the dead were both men and women aged from 19 to 70. The found that there were 3 main groups of photographs that emerged during their experiments, and these photographs were always correlated with the type of death that person endured:

1) Curves on the photo readings with relatively small variation amplitude. This was associated with a “calm death” as a result of natural motives, stipulated by organism’s condition, generally in the old age.

2) Curves on the photo readings with availability of one pronounced peak for several hours after death and relatively small amplitude afterwards. This was associated with an “unexpected death” in the issue of traffic accident followed by craniocerebral trauma.

3) Curves on the photo readings large amplitude variations, which continue for a long time. These were associated with an “unnatural death” as a consequence of unfavourable concourse of circumstances: a suicide, a murder, improper medical care, lungs clot.

They concluded that these are soft or left-over energetic substances of the dead that remained with the corpse and can be photographed, with the photos correlating with the time of trauma they experiences. There exists a sort of fingerprint of the soul that can be detected within the body. Here is a photo showing the nature of GDV photography: 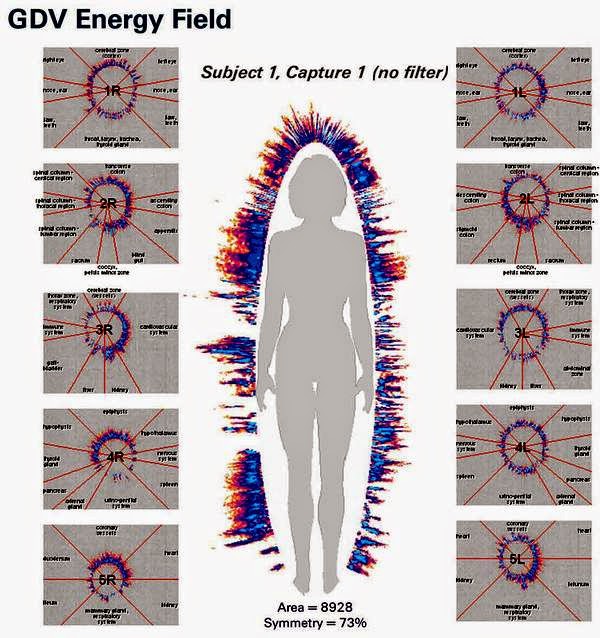 They say that the study gives credence to the idea of our physical systems being correlated with our energy-informational structures (souls). “We are talking about energy-informational structure as an objective space-field structure, interconnected with human body, but existing independently of it, particularly for some definite time after death. This structure originates from the birth and changes in the process of morphogenetic synergism.”

As I quote from the original paper which can be found here :

“We have received provisional data demonstrating that in some cases in a few days before death the raise of patient’s activity and increase of gas-discharge intensity are observed. Such data may provide for a new information on the process of Transition to other Life.”

So for the first time ever, the infamous case finally has the original study coupled with it to strengthen its claims. The photos of the soul leaving the body at death would look nothing like the one at the top of the article, and would look more like spikes and amplitudes in GDV energetic photographs that correlate with the nature of the persons death and the time at which they died. There may be other similar studies among the hundred he has published which have yet to be dug up and reported upon, but I think that it’s interesting to at least acknowledge the fact that photographs of our energy-informational systems can be objectively photographed within our bodies after death.

Sources: Listed within the article

Author: My name is Steven Bancarz , and I am the creator of ‘Spirit Science and Metaphysics’. Thanks for reading this article!