The Exceptional Inscription on the Pokotia Monument – Evidence of Sumerian Script in Bolivia?

by RE
in Human History, Knowledge
0

There is a very intriguing inscription on the back of the Pokotia Monolith. What makes it stand out is that it was written in linear Sumerian. Even more exciting is that it provides further evidence of a Sumerian presence in ancient South America.

When I deciphered the inscription, I was told that The Pokotia Monolith was discovered by Bernardo Biados, Freddy Arce, Javier Escalente, Cesar Calisaya, Leocadio Ticlla, Alberto Vasquez, Alvaro Fernholz, Omar Sadud, Paulo Batuani, and Rodrigo Velasco on January 4, 2002. They told me this discovery and other research done by these researchers was supported by the Honorable H. Enrique Toro, President of the Congress of Bolivia. 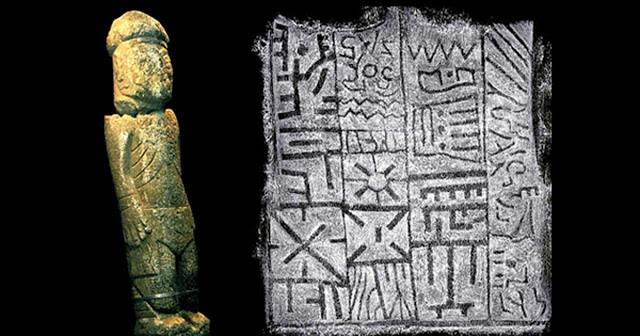 Bizarrely, the exact same inscription is shown on a tablet in the collection of Father Crespi, an Italian missionary who served in Ecuador. This can be viewed at 23:40 on the following video . 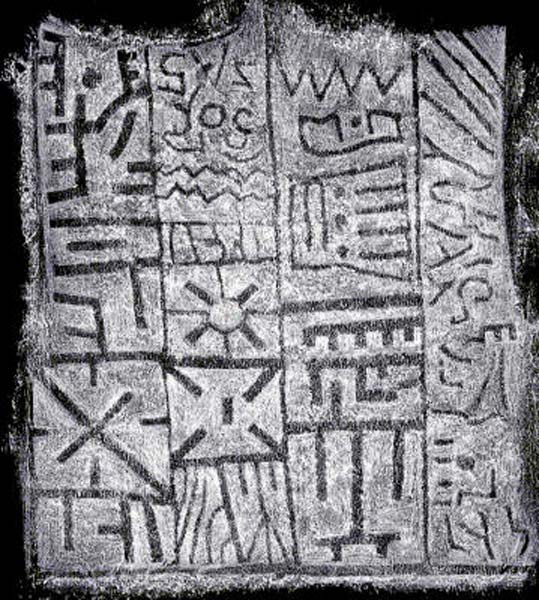 Inscription on the back of Pokotia Monolith. (Author provided)

Originally it was believed that there was an inscription written only on the front legs of the monolith, but further research indicated that there were also inscriptions on the back of the statue and directly below the left hand of the figure. 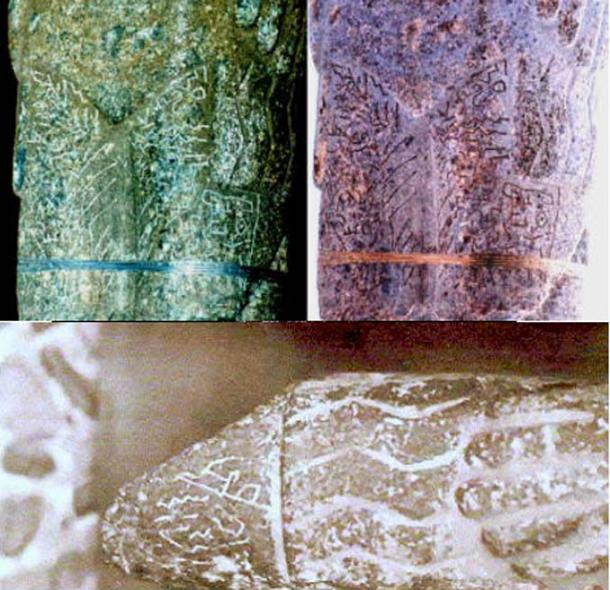 
The Pokotia inscriptions were written in linear Sumerian. This makes the text very significant because it supports the discovery of Sumerian symbols on the Fuente Magna bowl. They both provide evidence of Sumerian inscriptions in South America.

Putaki: Who was this Oracle Mentioned on the Pokotia Monolith?

The inscriptions on the back of the Pokotia statue define the role of the Putaki oracle in the community. It would appear that people recognized this oracle as a source of “truth” and glad tidings. Its additional role was to establish righteousness, wisdom, and good character for the members of the community who might use this oracle to communicate with the gods. 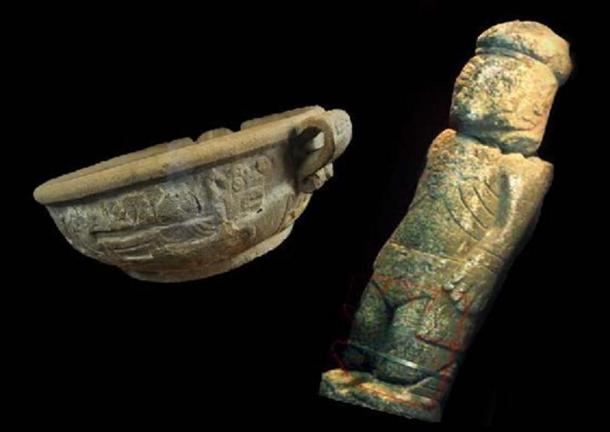 Throughout this inscription on the Pokotia monument the Putaki oracle is called “father”. For example, in column 1, it was written that: “Proclaim the establishment of character. The strong father (Putaki) to send forth the divination”. And, in column 4, we discover that [Putaki is] the father of wisdom (and) benefit (for all). This suggests that Putaki was recognized as the great ancestor of other oracles in Kuga-Ki.

This also indicates that Putaki oracle centers were situated in Bolivia. In these centers people went to divine the future, communicate with their gods and ancestors, or simply to obtain blessings and glad tidings from the Putaki oracle.

Similarities Between the Pokotia Monument and Statues at Tiahuanaco

The Pokotia monument is an authentic artifact made by the people of South America because it is identical to one of the statues from Tiahuanaco. This indicates that the Sumerians formerly lived in South America and may have played a role in the building of Tiahuanaco. It is also interesting to note that the Pokotia statue and Tiahuanaco monuments share similar headdresses and rib impressions along the chest area of several monuments. 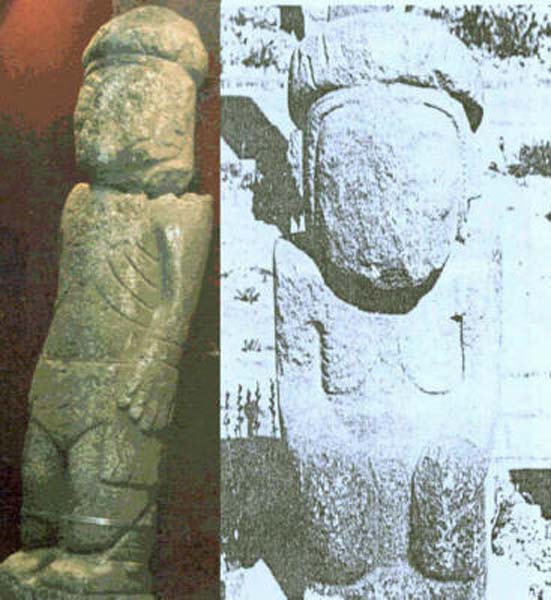 Comparison of the Pokotia monolith with a figure from Tiahuanaco. (Author provided)

Among the Inca, it was popular to put Sumerian symbols in their textiles. Much of what we can decipher about the writing system of the ancient Peruvians comes from Felipe Guaman Poma de Ayala’s El primer nueva crónica y buen gobierno (The First New Chronicle and Good Government). This Peruvian chronicle dates back to 1615. Felipe Guaman Poma de Ayala was a Native American.

In my book Ancient Scripts in South America, I discuss the Sumerian symbols found the textiles of Inca Sagas. In the images provided by Guaman Poma we find many Inca rulers, called Saga or Capac, that have Proto-Sumerian signs on their clothing. 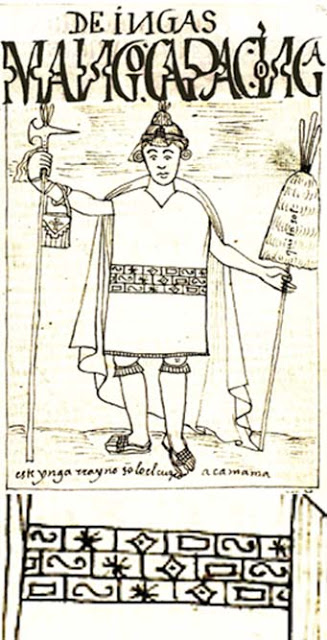 Depiction of Manco Cápac by Felipe Huaman Poma de Ayala and detail of the symbols on his clothing. (Public Domain)

It is interesting to note that the Proto-Sumerian signs on South American textiles were not just restricted to Peru. The writing on the Pokotia monolith makes it clear that the Pokotia oracle was heard by many people in ancient Bolivia too. During Inca (Sumerian: En-ka “Great Lord”) times, the temple city of Pachacamac contained the idol of Pachacamac, which was a commanding oracle drawing devotees from Ecuador in the North through Bolivia in the South. People came from far and wide for a Pachacamac prophesy (Moseley, p.68). The Pokotia monolith makes it clear that the popularity of oracles in this part of South America existed all the way back in time to the creation of the Putaki oracle. 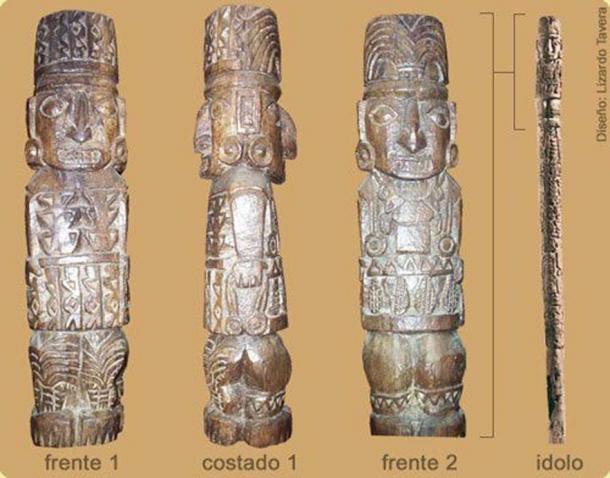 Importance of the Pokotia Monolith and Fuente Magna Bowl

The fact that there are inscriptions written in Sumerian on pieces like the Fuente Magna bowl and Pokotia monolith suggest that the Sumerian language continued to be spoken in this area for an extended period of time. This explains why we find Sumerian and Aymara cognate terms.

Along with the Sumerian symbols on the Fuente Magna Bowl and Pokotia monument, the identification of Sumerian place names on the Altiplano suggest that Bolivia was at least part of Kuga-Ki. Kuga-Ki was the “Tin Land of the West” or the “Sunset Land”, in Sumerian inscriptions. These artifacts also show the widespread existence of Putaki Oracle centers in Bolivia.