It’s rather ironic that this latest wave of Western armed and financed “Islamic” militants invading Iraq and now conveniently threatening Syria and Iran is named ISIS. Or is it deliberate? It’s being used to stand for this oddly anglicised fabricated “Islamic State in Iraq and Syria” full on barbaric movement presently sweeping Iraq, but anyone acquainted with any degree of occult knowledge or esoteric mythology know the goddess Isis is one of the most important figures in the so-called mystery schools and a favorite of Freemasonry and the Illuminati.

And for many very dark reasons for which they have manipulated, murdered and thoroughly deceived humanity for millennia.

While the US is currently once again self-appointedly deciding whether to go into all out overt war on this entire region from Lebanon to Iran based on this “unforeseen phenomenon”, this parasitic plan goes on full throttle, ripping the guts out of millions of innocent people’s lives for the Machiavellian desires of a few. All while they hoodwink the masses into a completely backwards interpretation of their devious sorcery. 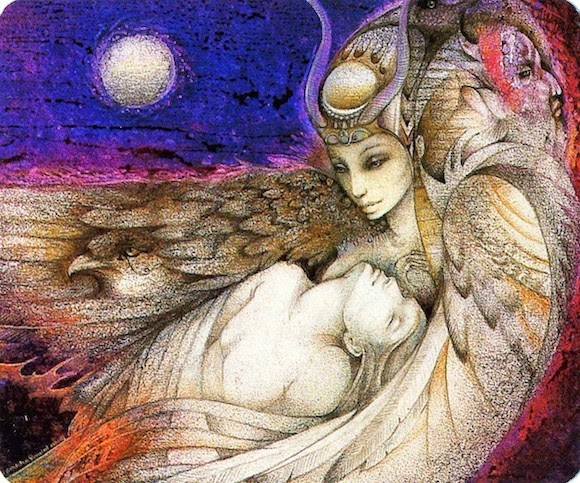 These “elite” few are fueled by something besides their psychopathy – it’s an occult allegiance to powerful symbolic entities, whether they are all fully conscious of their allegiances to these powers or not. Such is the case of most of manipulated humanity.

Isis and the Illuminati

It’s important to know that almost every portrayal of a feminine goddess, a specialty of Freemasonic art, literature and architecture, hails back to Isis, no matter whether it’s called “The Statue of Liberty”, “Blind Justice”, “Mother Mary”, “Columbia” or some other “Queen of Heaven” or whatever label they want to give her. They’re almost all the same entity. Isis in turn goes back to Sumer and the goddess Semiramis, or Ishtar, an embodiment of this same esoteric deity.

She was/is considered the goddess of enchantment and magic. Married to her brother Osiris, the two of whom then gave birth to the infamous Horus, all major characters in the play, she wandered looking for the dismembered penis of her former husband “wailing and moaning like the wind”. Hence the world “crown capitals” of Washington DC, the City of London and the Vatican all boasting phallic obelisks in this memory, as well as many other major financial and political energy centers.

The true worldly “powers that be” are beholden to other “Powers that Be” that are not so worldly. This may need more research and validation on your part but for me and many other researchers it is very evident. When this becomes apparent, reading into the symbols and embedded images and language of our carefully created culture becomes a much easier and even every day task.

At that point it may become a bit overwhelming but don’t let it be, it’s been there all the time, we just didn’t see it.

The Illuminati is actually a rather flimsy label considering all we know about the workings of these dark occult driven psychopaths. Their derivation is not as important as their current effects on humanity, but understanding their roots gives light to their intentions. That being said, here’s a quote on their roots, tying them into Isis worship and obeisance.

“Power” is not all that meets the eye.

“Popular history texts and encyclopedias generally paint the Illuminati as having its origins in 1776 Bavaria. However, the origins go back much further. The Illuminati are tied directly through masonry to the sun and Isis cults of ancient Egypt. Killing was a mystical experience to this branch of the Mystery Schools. They not only maintained their control by murder and threats of murder, they believed that the assassin could acquire the gnosis, or soul energy from the victim. This is the theory behind the human and animal sacrifices of Satanists throughout history (and the ritual child abuse etc). Satanists believe that sacrifices release more of it than anything else. Such are the dark and sordid machinations of the deluded souls who think their gnosis accumulations and illumination will give them some form of deity or immortality. . .” (source)

That’s just a quick glimpse. Research for yourself and learn much more. Massive casualties and deaths turn them on. As it does for those controlling them behind the scenes both here and inter-dimensionally.

You’ll find this energy vampirism throughout any esoteric studies on this subject, popularized by the Matrix movies where humans are considered energy “batteries” to be drained and utilized. That’s pretty much what they’re up to.

By the way, as far a manipulating the Arab masses, the choice of the supposed leader’s name of these high financed and western trained pre-positioned rogue forces is Abu Bakr Al Baghdadi. This name couldn’t be any more incendiary.

The schism between Sunni and Shia Muslims lies in disputes over who would succeed Muhammad as leader of the faithful after his death in 632. The Shiites thought the prophet’s son-in-law and cousin should lead as caliph, particularly given his blood relationship to Muhammad. Their opponents, the Sunnis, thought Abu Bakr, one of Mohammad’s first converts, should be their leader.

The Shiites lost a series of wars for power in the early years of Islam and today are the clear minority in global Islam, making up about 15 percent of adherents. They are in the majority in Iraq and Iran. (source)

No mere coincidence there.

After Mohammed died (632), an assembly of Moslems in Mecca elected Abu Bakr as the first ‘khalifat rasul Allah’ (successor of the Prophet of God), or caliph. Under him the collection of Mohammed’s revelations was recorded in the Koran. Abu Bakr suppressed tribal uprisings and brought central Arabia under Moslem control, after which he directed Arab armies into Iraq and Syria initiating thus the Moslem conquests. (source)

And Al Baghdadi? Clearly an affirmation of their intent to take over the capital and subdue all of Iraq. All of this cleverly engineered, any way you look at it.

Having said the previous, the geopolitical situation is worsening at breakneck speed. It becomes increasingly apparent that time’s extremely limited for doing anything majorly “unnecessary” in each of our lives. This massive new Middle East and Ukraine initiative, with their carefully sculpted excuse unfolding as we speak, has to blow soon. On top of that, the US is set to implode very soon with power station closures, hyper inflation, governmental crackdowns and the like.

They’re also clearly planning for massive unrest . Well of course they are, they’re causing it.

All this has to reach critical mass very soon. Once these kinds of things blow they each affect the other. Critical mass can be reached from so many different angles, not just local economic, immigration, food and energy issues, but now this recent offensive in Iraq by this marauding band of murderers. Should these “inspired” western powers go through with their stepped up plans of further intervention, I don’t see Russia and Iran standing idly by. And if it blows there, the rest could go up like a tinderbox.

This has been building for a while, but maybe that’s why this new, and clearly world startling false flag fabricated offensive is called ISIS. The military is famous for using occult names and symbols and this is clearly more of the same.

Are they honoring and thereby calling on their “goddess” as they pull the magic trigger?

Something to seriously wonder about. It’s clearly a time to connect the dots in any way we can and act accordingly.