“Sovereignty is responsible for every war, bloodshed and terror that has ever inflicted humankind… Human beings must unite under one world government and constitution. Giving their voice and power to one government and one authority.” – the Organization now calling itself ‘Anonymous’

By virtue of the appeal of anonymity, the resistance group known as ‘Anonymous’ has become a worldwide phenomenon. Since anybody with basic knowledge of hacking or content creation, and with any motive, can rightfully claim to be part of this structureless organization, Anonymous is now more of a creative commons brand than anything.

“…“Anonymous,” which is a loosely associated international network of “hacktivists.” Anonymous has no real command structure and is largely a collective of ideas. Nonetheless, it has been associated with several DDoS (distributed denial-of-service) attacks on high profile government, corporate, and religious targets. Their unofficial mascot is the image of Guy Fawkes.” [Source] 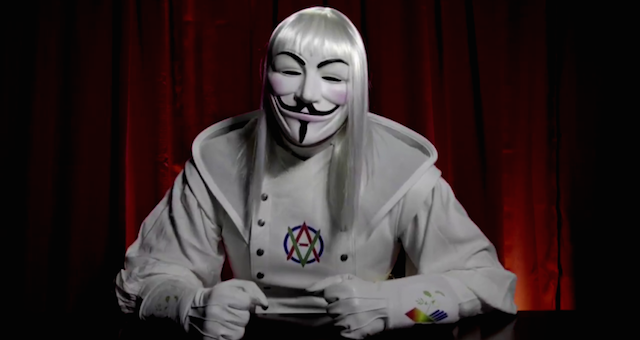 The FBI spent years dismantling the core group of hacktivists responsible for the formation of the original group, incarcerating much of the primary brain trust which made Anonymous (Anon) a serious threat to government and corporate actors. However, Anonymous’ branded use of the Guy Fawkes mask, as popularized by the movie ‘V’ for Vendetta, helped them to achieve international household recognition. The brand is now synonymous with civil disobedience and electronic resistance, and in this loosely bound way, the organization lives on.


“The movement is still there, and they’re still yacking on Twitter and posting things, but you don’t hear about these guys coming forward with those large breaches… It’s just not happening, and that’s because of the dismantlement of the largest players.” – Austin P. Berglas, assistant special agent in charge of the FBI’s cyber division in New York

The beauty of Anon has always been its adaptive application of leaderless resistance to a technology driven world, however, there appears to be an attempted coup taking place, and Anonymous as a headless social justice movement is being hi-jacked by a group of unknowns claiming this brand as theirs to promote a privately funded political party with a highly suspicious platform advocating for a one world government .

“Today we officially announce the unification of all people who have used the anonymous mask and its representation to protest and stand up for change. The way that the anonymous icon and name has been used by a few through fear and intimidation ends today.” – THumP®

Now armed with the trademarked names, the Voice of Anonymous™, and, THumP®, the co-opting of the Anonymous brand was recently introduced to the world in a 40 minute, professionally staged video announcing the public launch of The Humanity Party (THumP®).

“In March of 2015, various Anons discreetly met via the Internet and Skype to vote on a Board of Directors to lead the movement. The Board appointed one of its Anons as its Voice of Anonymous™.” – THumP®

It appears the days of the synthesized robotic voice that has become synonymous with Anon are over, and from now on…

“… it’s only gonna be this one voice of this one character who decides to put on a costume that looks almost like he’s in the KKK. And he has some sort of Masonic symbols on it, he’s got these creepy clown gloves and some sort of Abba wig on, and so suddenly he’s gonna be the voice of Anonymous.” [Source]

The video presentation features a messianic Guy-Fawkes-mask-wearing, leader-type figure, dressed in white leather emblazoned with a Freemason logo modified to present the letters ‘A’ an ‘V.” The use of secret society symbolism , such as the Freemason logo is ubiquitous in modern media, representing, in actuality, the very organizations and forces that Anonymous had always been resisting. 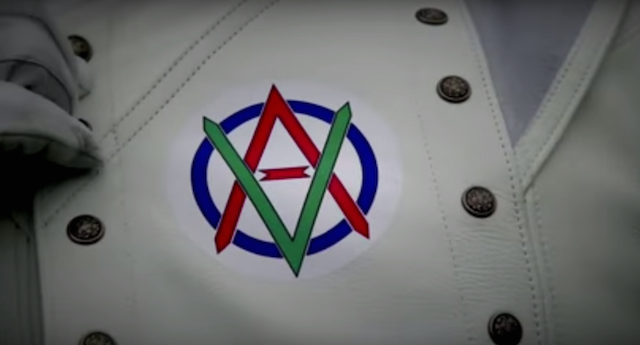 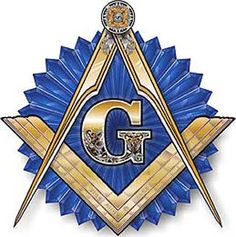 During the introduction to the video, the viewer is nonchalantly instructed to only pay attention to this voice, to accept it as the authorized, official Voice of Anonymous™, and to ignore any others.

“From today on, it will be easy to determine whether a message that is posted on the internet, or through any other venue of social media, is authorized by the official voice of Anonymous… In the future, listen for and pay particular attention to the distinct nature, authority and power of the voice of Anonymous. Do not listen to any other computer generated voice, that makes threats and disrupts peace, and does not act rationally.”

According to the website, it will be managed by, “The collective will of people who give their voice and support to what THumP® is trying to accomplish.”

And, what exactly is THumP® trying to accomplish?

In a press release dated June, 20th, hosted by 24-7pressrelease.com , reporting from Salt Lake City, Utah, the following was posted for public consideration:

“Establish and promote the possibility of a ONE World Government and a new Constitution that guarantees and provides worldwide basic human rights to ALL people of Earth. These inalienable human rights include the Five Basic Necessities of Life (“FBNL”): free healthy food and water, secure and safe housing, basic clothing, health and mental care, and education.

Introduce a plan to unify capitalistic and socialistic agendas and ideologies to provide the FBNL free of charge.

Promote peace and unity through education and common sense disclosures, thereby providing unprecedented evidence that the world’s major religions have been, are, and will continue to be the cause of the world’s social ills.

Unparalleled and unique, The Humanity Party does not accept donations of any kind. The movement relies on individual Anons throughout the world to use individual peaceful and legal means through social and Internet media to spread its message.” [Source]

As stated here and in the PR video, their primary goals are to abolish borders and national sovereignty, ban religion, to establish a global government that will protect the environment, protect animal rights and human individuality, while providing for everyone, the FBNL. To accomplish this, the US Constitution will be modified .

“There is only one nation that is fully structured and endowed with the infrastructure, government, world influence, technology, means, and military might needed to step forward and save this world: the United States of America.” – THumP®

Other key tenets of their platform, include: the need for individuality and diversity, the end of nationalism and national sovereignty, the abandonment of tradition, ideology, patriotism and prejudices, and the demonization of math, science and intellectualism. All of which are presented as opponents of human intelligence.

If we are all united behind this platform, why will state violence and ‘military might’ be necessary to enforce it? 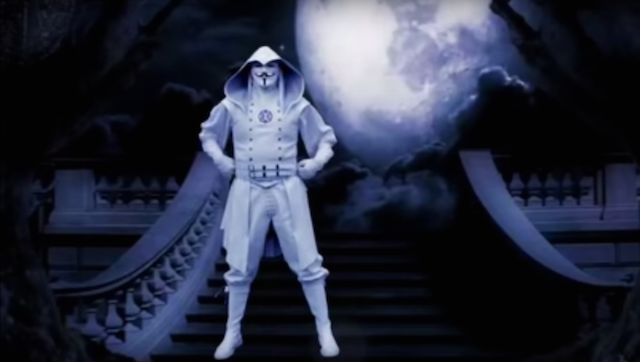 As justification of the policies proposed, the video spends considerable time positioning the world’s incredible problems as the result of adults, while extolling the virtues of the minds of ‘little children,’ who, according to THumP®, have had their intelligence replaced with knowledge by grown ups:

“We were forced to accept the adult way. Their way. Regardless of how we felt about it. To impress the adults and be accepted by them, we learned their ways. Accepted their Gods. and Applied their values to ourself. We learned their science…” – THumP®

The message is directed at the younger demographic of today’s activists, capitalizing on their justifiable anger at the establishment, and dumbing down complex issues to meet an overtly neo-liberal agenda. The video also comes off as anti-family, eerily reminiscent of the disturbing picture painted by George Orwell in 1984 of an all-powerful government who destroys the family by turning children into agent’s and tools of state ideology.

These aims are suspiciously similar to the long-standing goals of world elite and powerful families who control the breadth of international banking and global industry. This is the ‘1%’ that Anonymous has combated in the past, and it includes the people, groups and institutions oft-referred to as the Illuminati, or the New World Order (NWO).

For a more complete understanding of the NWO’s platform, see Dr. John Coleman’s 1983 breakdown, 21 Goals of the Illuminati and The Committee of 300 . Dr. Coleman’s comprehensive, research-based list includes the following tenets:

THumP® is propositioning young people to adopt the endgame of the elite, while posing as the resistance. This kind of psychological operation has been seen before, most notably in the production of the Koni 2012 pre campaign which aimed to engineer public support for military interventionism in Africa.

The Humanity Party also fails to acknowledge taxation as theft, calling instead for a fair tax, then blames global inequality not on a corrupt oligarchy, but on the masses of people who support governments around the world by voting. Making a statement of defense for the 1%, THumP® says:

“The humanity party does not support attack or reforms that punish the wealthy for doing what all people on earth wish they could do, have financial security for themselves or their dependents… Because of the desire of the 99% to also become wealthy the people of earth are justifying supporting current governments that are set up and established to cater more to the needs of the 1% than to the needs of the majority. This is the fault of the people who elect and support their governments.” –THumP®

As declared, the party does not accept donations, yet they are funded well-enough to produce studio quality staged video, professional press-releases, websites and videos. This would indicate that is privately funded, meaning that funds are coming from people who can afford to invest in propaganda, the 1%. A phone number on their site is from an area code in Pennsylvania.

The THumP® campaign may be interpreted as, “Resistance is futile. So if you can’t beat ’em, join ’em.” The future of Anonymous as a resistance organization is in question.

“Anonymous doesn’t even exist anymore. All the actual hackers behind it have been arrested. It has since been pseudonym government agencies use to disclose their enemies’ personal information without it looking like obvious government involvement. All recent anonymous attacks have not been on oppressive governments but rather the opposite, their enemies.” [Source]

What are your thoughts on this operation and its meaning to true global civil resistance to state tyranny? Is this legitimate? Is it another propaganda campaign of the global elite, or another Soros operation ? Is this somehow linked to Trump, Clinton and Sanders?

“Anyone who is so naive as to believe the most powerful government on earth will not crush any who pose a real threat to that power, should not be active, but rather, at home studying political history.” – Louis Beam

Take a look at the promotional presentation for The Humanity Party and the attempted hi-jacking of Anonymous by The New World Order:

Dylan Charles is a student and teacher of Shaolin Kung Fu, Tai Chi and Qi Gong, a practitioner of Yoga and Taoist arts, and an activist and idealist passionately engaged in the struggle for a more sustainable and just world for future generations. He is the editor of WakingTimes.com , the proprietor of OffgridOutpost.com , a grateful father and a man who seeks to enlighten others with the power of inspiring information and action. He may be contacted at [email protected] .