Near-death experiences have been a point of interest that almost every person has thought of at some point or another.

This may be due to the fact that death is one of the very few aspects of life that we all have in common; more likely, though, I believe our interest in this topic is based in the fact that nobody who has died has…well…lived to tell the tale. In this article, I intend to shed some light on some of the more commonly accepted scientific explanations for the common stories we’ve heard from people who have been proclaimed dead but somehow found their way back.

First, I’d like to mention that the Science of Neurology and Religion aren’t really, necessarily, contradictory with one another. As such, I bring these notions to light not as a means of distracting from the religious or spiritual potentials associated with near-death experiences and their stories, but simply to educate my readers on the significance of primary and secondary brain functions in matters such as these. In fact, I wrote an article a very long time ago regarding how complex our brains are, and how consciousness itself has a basis in spirituality; some of the topics which I will discuss in this could very well coincide with my statements in that article, further suggesting that our brains give our conscious minds a connection which can be understood physically to something which happens purely spiritually. There are even unexplainable events which science can’t account for; for example, the famous case of “Maria“ who underwent cardiac arrest, and, after resuscitation, recounted details of a tennis shoe on the ledge of a third-floor window which she had no way of knowing existed. 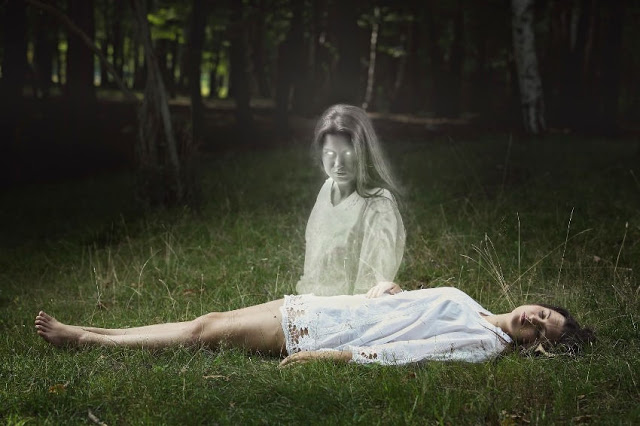 The Temporoparietal junction is the region of the brain which assembles data collected from the body’s senses and organs in order to form perception as we know it. This region of our brain has been known to become damaged and virtually shut down immediately upon death, and it has been speculated that this would explain out of body experiences. Though the experience may seem real, it could simply be the perception which our temporoparietal junction created upon being jump-started back to life. In other words, the images a person sees and feelings they experience during out of body experiences could just be their brain associating relevant details and creating a justification for what had just happened while the junction was “out of office”.

Hallucinations have been thought to play a large role in near-death experience recounts. A lot of people have talked about seeing spirits, recently dead relatives, a tunnel of light, etc. This tunnel of light has been speculated to be created by an excess of carbon dioxide, but I don’t intend on getting into that commonly accepted theory in this publication. Hallucinations, however, do seem very feasible. When a person goes into cardiac arrest, drowns, or otherwise dies on an operating bed due to any cause, their muscles stop functioning, and they stop breathing. It is known that oxygen deprivation will lead to hallucinations, and may even contribute to feelings of euphoria. While this is just a theory, it is logical to think that these hallucinations, especially in conjunction with the temporoparietal junction malfunction, could explain everything seen during near-death experiences, even the so acclaimed “life flashing before your eyes”.

A little more of a biological explanation which may account for near death experience recounts could be the “hyperconsciousness,” which has been proven to result for the first thirty seconds after death. Electrodes were implanted in the brains of rats to monitor brain activity at the time of death, and the portions of the brain which deal with perception, including the temporoparietal junction, function significantly differently for this 30 second period. Some of them, hence the term hyperconsciousness, accelerate to unbelievable activity levels. While this could be the cause of the perceptions during a near death experience, I’d like to invite my readers to consider that this could, maybe, be a symptom of a spiritual occurrence.

The last thing I’d like to cover is the fact that, no matter what is perceived, whether it’s your life flashing before your eyes or a long tunnel that you spend an eternity walking through when a person is awakened they always feel like they’ve been dead for hours. Often it’s only minutes. Some people take this to mean that they were in their spirit form where time passes much more slowly. Scientifically, though, this can be explained by the cerebral cortex function returning to normal after a near death experience. To quote Metallica, “Time is an illusion” – it is, quite literally, a human construct used to allow for more efficiency and accurate recounting in our lives. The speed at which time passes by is influenced by many factors, including how much fun you’re having or how many details you’re perceiving.

So, whether near-death experiences prove there’s another world out there after death or not is still debatable. As I mentioned, there are many occurrences which can’t be explained with our current knowledge of science. This article is meant to expand your awareness of other potentials which have been looked into regarding this age-old question of “What happens when we die“. The more perspectives we can analyze a circumstance from, the more logical our conclusion will be, and the more invested in that belief we will be for it.