Ancient Babylonian tablet PROVES the Tower of Babel was REAL

According to an ancient Babylonian tablet, the biblical tower of Babel was real.

An ancient tablet which dates back to the sixth century BC—and was discovered over a century ago—offers conclusive evidence that the tower of Babel was real. The tablet also provides the first-ever image of the real Tower of Babel and describes the building process and the man behind it: Mesopotamia’s most famous ruler, King Nebuchadnezzar II.

The ancient tablet composed in the legendary city of Babylon dates to approximately 600 B.C. and was unearthed a century ago. However, only recently has the tablet been studied accordingly, when Dr. Andrew George of the University of London noted that the stone bears an image seemingly depicting the biblical tower. The tablet remained in the private collection of Norwegian businessman Martin Schøyen for years. 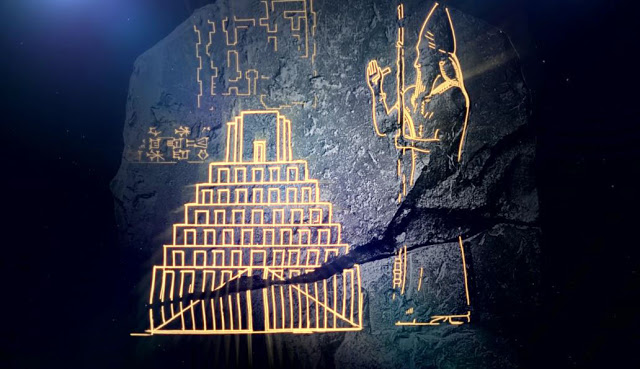 The Ancient Clay tablet—which dates back to the sixth century BC—clearly shows the tower of Babel and its builder, King Nebuchadnezzar II. Image Credit: Smithsonian

According to the website Schøyen Collection, the ziggurat in Babylon was originally built around the time of Hammurabi 1792–1750 B.C. “The restoration and enlargement began under Nabopolassar, and was finished after 43 years of work under Nebuchadnezzar II, 604-562 B.C.

The Smithsonian Magazine features a video where Dr. Geroge discusses the tower of Babel and his evidence—which according to many is quite persuasive.

It is believed—in theory—that there was once a SINGLE, original language spoken by mankind. Interestingly, as many other things, this too appears in the Bible, Book of Genesis, Chapter 11, in a passage that also mentions the tower of Babel.

1 Now the whole earth used the same language and the same words. 2 It came about as they journeyed east, that they found a plain in the land of Shinar and settled there. 3 They said to one another, “Come, let us make bricks and burn them thoroughly.” And they used brick for stone, and they used tar for mortar. 4 They said, “Come, let us build for ourselves a city and a tower whose top will reach into heaven, and let us make for ourselves a name, otherwise we will be scattered abroad over the face of the whole earth.” 5 The LORD came down to see the city and the tower which the sons of men had built. 6 The LORD said, “Behold, they are one people, and they all have the same language. And this is what they began to do, and now nothing which they purpose to do will be impossible for them. 7 “Come, let Us go down and there confuse their language so that they will not understand one another’s speech.” 8 So the LORD scattered them abroad from there over the face of the whole earth, and they stopped building the city. 9 Therefore its name was called Babel because there the LORD confused the language of the whole earth, and from there the LORD scattered them abroad over the face of the whole earth. ( Source )

In the video by the Smithsonian—which is part of the new season of the Smithsonian Channel’s “Secrets” series—D. George explains the inscriptions on the tablet which depict a stepped tower and a figure of a human carrying a staff and a conical hat on.

Below the relief, says Dr. George, is a text that has been chiseled into the monument and the label is easily read, and it reads “The ziggurat temple tower of the City of Babylon.”

“This tablet provides the first-ever image of the real Tower of Babel. It confirms the building was a Mesopotamian stepped tower and illustrates the seven tiers of the ancient megastructure. Significantly, it also clearly identifies the man behind it: Mesopotamia’s most famous ruler, King Nebuchadnezzar II,” says the video by the Smithsonian Institute.

Incredibly, the inscriptions on the tablet provide a wealth of information on how the tower came to be.

Dr. George explains in the video: “…It reads, ‘From the upper sea,’ which is the Mediterranean, ‘to the lower sea,’ and that’s the Persian Gulf,” Dr. George outlines in the episode. “The far-flung lands and teeming people of the habitations are mobilized in order to construct this building—the ziggurat of Babylon.”

Furthermore, the video presented by the Smithsonian Institute notes: “Incredibly, this ancient account is identical to the biblical story of how the Tower of Babel was constructed. For scholars, the tablet offers further proof that the Tower of Babel wasn’t just a work of fiction. It was an actual building from antiquity.”