Chemtrails Can Be Biowarfare, or Geoengineering: History of Biological, Chemical Experiments on Citizens

( Era of Wisdom ) This video makes the case that there are two different distinct agendas of “chemtrails” sprayed out of airplanes: there is weather modification or geoengineering, and then there are biological warfare experiments and toxic chemicals that seem to be disguised by the geoengineering materials, which contain such things as aluminum and barium.

It would seem as if the geoengineering spray could disguise other biological warfare agents and chemicals used for completely different purposes. 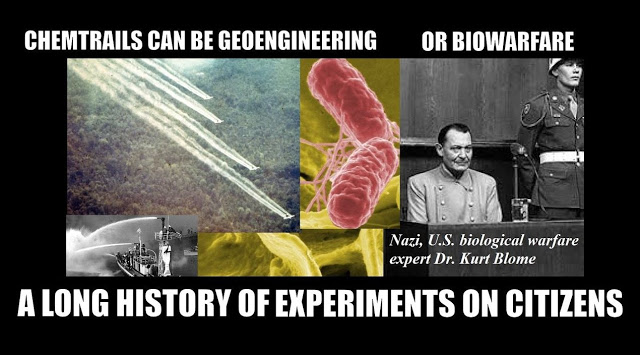 This video explores an astoundingly long history of U.S. government experiments on citizens with biological warfare agents and chemicals, from the spraying of San Francisco with bacteria in “ One of the largest human experiments in history ,” to the potential murder of CIA, MK ULTRA chemist Frank Olson who worked at Ft. Detrick.

We explore Ft. Detrick and how Nazi scientist Dr. Kurt Blome “admitted he had worked on Nazi bacteriological warfare projects and had experimented on concentration camp prisoners with bubonic plague and sarin gas at Auschwitz,” and was saved from the Nuremberg Trials by the U.S. to later participate in biological warfare experiments on U.S. citizens at Ft. Detrick, as part of MK ULTRA.

We expose how today, the Department of Homeland Security is still building another facility to experiment with biological warfare and things they very well could be testing on us right now, even after safety breaches in recent years at similiar facilities and the utterly disgusting nature of biological warfare. It is called the “National Bio and Agro-Defense Facility,” set to be built in Kansas, to mirror the historically criminal Plum Island Animal Disease facility.

Please share this incomprehensibly long history with anyone who finds it implausible that the government would spray us with bacteria or toxic chemicals. Geoengineering is one main purpose of what we call “chemtrails,” but it can easily disguise bacteria, biological warfare agents, toxic chemicals, and who knows what they may spray on us, only to be declassified years later like all the other incidents.

What we call chemtrails contain mostly geoengineering materials, but we must pay attention if we want to know when they spray us with even worse things, and we must know our history. Also research: “Morgellon’s Disease.”