A new study published in Molecular Biology and Evolution suggests that consuming a long-term vegetarian diet may alter human DNA and make people more susceptible to some cancers and heart disease.

This, according to researchers, is because DNA makes vegetarians more susceptible to inflammation by boosting arachidonic acid, a substance linked to cancer and inflammation. The study suggests that because of this, vegetarian populations have a 40% increased risk of developing colorectal cancer.

The research is a bit surprising, as a vegetarian diet has long been associated with a variety of health benefits . Vegetarianism has been shown to decrease the risk for Type 2 diabetes, and help people with disease management. Research also suggests the antioxidants reaped from fruits and vegetables cut the likelihood a person will develop cardiovascular disease. These are just a few of the purported health benefits of a plant-based diet.

Tom Brenna, Professor of Human Nutrition at Cornell, explained that his team found people with a long ancestral line of vegetarianism are more likely to have genetics predisposed to rapidly metabolize plant fatty acids.

“Those whose ancestry derives from vegetarians are more likely to carry genetics that more rapidly metabolise plant fatty acids. In such individuals, vegetable oils will be converted to the more pro-inflammatory arachidonic acid, increasing the risk for chronic inflammation that is implicated in the development of heart disease, and exacerbates cancer.”

Nutritionists say consuming a healthy balance of Omega-3 and Omega-6 fatty acids is vital for good health. Omega-3 are found in fish, whole grains, olive oil, and fruits and vegetables, while omega-6 are found in beef, pork products and many packaged snack foods such as cookies, candies, cakes and chips, as well as nuts and vegetable oils. Clearly, it’s wise to avoid the packaged snack foods.

The body can’t produce either type of fatty acids naturally, so humans must get them from food sources.

Omega-3 fatty acids are anti-inflammatory and help regulate metabolism, whereas Omega-6 fatty acids actually contribute to inflammation, but still plays an important role in skin and hair growth, bone health, and reproductive health. We need a certain amount of inflammation to help us fight infection and protect us from injury. However too much inflammation can cause everything from an increased risk of heart disease to cancer, Alzheimer’s disease, and diabetes. 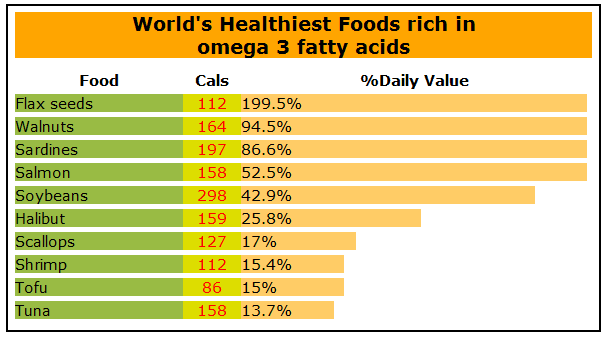 A perfect example of this is red meat. Last year, the World Health Organization’s (WHO) International Agency for Research on Cancer (IARC) concluded red meat is “probably carcinogenic to humans.” This is because red meat causes inflammation. This doesn’t mean the occasional burger or steak is going to cause cancer.

According to the WHO , the organization’s request that the IARC study the red meat-cancer link “was based on epidemiological studies suggesting small increases in the risk of several cancers may be associated with high consumption of red meat…”

The West, with all of its wealth, technology, science, and medicine, has a ratio of omega-6 to omega-3 essential fatty acids of about 15 or 16:1. Humans evolved with a ratio of about 1:1. Doctors often recommend the Mediterranean diet, which is closer to having an equal balance of the two.

The new study shows no diet is one-size-fits-all, and suggests that different people may need vastly different ratios of Omega-3 and Omega-6 in their diets depending on their genes.

“In such individuals, vegetable oils will be converted to the more pro-inflammatory arachidonic acid, increasing the risk for chronic inflammation that is implicated in the development of heart disease, and exacerbates cancer. The mutation appeared in the human genome long ago, and has been passed down through the human family.”

Fortunately, none of this means vegetarians have to give up or radically change their diet, Brenna explained:

“The message for vegetarians is simple. Use vegetable oils that are low in omega-6 linoleic acid such as olive oil.”