Russell Brand About Reptilians, Illuminati and the Current Social Challenges

Yes, now I am positive that I like Russell Brand! He is a funny and charismatic public person (a.k.a. “celebrity”, to the tabloid consumers), concerned with mankind’s spiritual evolution. Russell is able to address some of the most controversial subjects in a funny, yet mature and intelligent manner, making himself understood by people of different ages and education backgrounds. Personally, I am interested in the young generation, especially, because they are the future of our species, and they are currently being subjected to the most powerful mind programs to date.

People like Russell Brand and Woody Harrelson are like breaths of fresh air in these over-polluted movie and music industries. They represent hope for the future, because our children look up to them, and they are willing to listen to their message – whatever the message may be. So I am thrilled when the message is educational and positive. 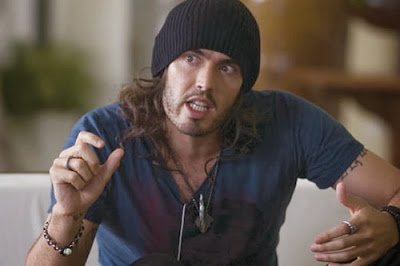 The Beginning of a Televised Spiritual Revolution

In a recent BBC interview with Jeremy Paxman, Russell Brand might have marked the beginning of a revolution. Yes, the revolution is already happening for quite some time now, but Russell Brand draw awareness to these changes, live, on BBC. And he was passionate about it! As we all know, people get inspired by passionate people who MAKE SENSE. More people like him, and it’s going to happen sooner, rather than later.

In the following video, Daniel Pinchbeck interviewed Russel Brand for “Gaiam TV.” They discuss a bunch of interesting topics, like grubby economy and corrupted politics, in an attempt to “reconcile our current systems with the new spiritual paradigms.”

“Certain cultural narratives are promoted, that are beneficial only to elites. These cultural narratives are not true (…) The only reality that is relevant is: we have this planet, there are this many people on the planet, there are these resources; any system that is in conflict with the even distribution of the resources to the people, is a disingenuous and illusory system.”

Such a concept already exists and could be achieved in a decade – if we ask for it! It’s called a Resource Based Economy and it is the exact opposite of today’s corrupt financial system. There is even a transition plan outlined, so let’s make this happen ASAP!

As you might have guessed by now, my favorite moment was when Daniel and Russell addressed the reptilian theory. Russell was empathizing that we need to focus on the really important things: “All these things are just ideas: America – just an idea, England – just an idea, karate – just an idea, Wednesday – just an idea”, when he was suddenly interrupted by Daniel: “What about reptilian overlord aliens?” , he asked. “Definitely a real thing” , Russel said laughing.

But what he said next, is really important and denotes a vast understanding of how living beings operate:

“On some level they are just a super-frequency, a vibration (…) so try not to worry too much about the reptilian overlords (…) I think that all we have to do is not worry too much about that. That’s just iconography and narrative data. The important data is imperceptible to us (…) because this realm of the senses is so limited: we can only see between infrared light and ultraviolet light, and we can only hear a limited decibel range, we think reality is what we can apportion through the limited instruments of the senses, but reality is, of course, far beyond that. Spiritual data – we don’t have the correct instruments to receive it, and we live primarily in the realm of the senses.”

What it means is that there are things that we cannot yet decode, hence understand, but there is no reason for us to worry about them. If we are being controlled from another dimension, which we cannot decode in any way, then we must rise our vibration in order to evolve beyond the frequency of control. Anything else is futile. But how can achieve this? By becoming spiritual (I don’t mean religious), loving, tolerant and kind to one another. When we will understand that we are all ONE, and we can only evolve together, as a species, that’s when the spiritual revolution will take place – and it will happen within one generation.

As Russel said, “(…) Now we must transform, become enlightened, so that we can access the next realm of consciousness necessary for our evolution.”

Luckily, I already see the needed patterns for a wiser species: the idea of a completely different economy, based on Earth’s resources rather than currency; the idea of a society built around mankind’s needs, rather than profit; an incredibly high number of newly created spiritual movements, which are not religious cults; a shift in consciousness and thinking all around the planet; and many other, more subtle patterns, which will someday lead to a peaceful revolution.

It is truly Wonderful to be part of it, together with so many Wise and Loving spirits. Yes, I mean YOU! Keep spreading the Truth and keep shining your Light! I ♥ YOU!