Study Says Geoengineering Not the Solution to Climate Change

by RE
in Chemtrails, Conspiracy, Depopulation, World Truth
0

Study Says Geoengineering Not the Solution to Climate Change

A review of studies on geoengineering has found that deliberately altering the weather as a method for stopping climate change will have negligible effects.

Scientists have known for decades that atmospheric aerosols can create a cooling effect on the climate by scattering incoming solar radiation back to space. In the last several years an increasing number of researchers have suggested that scientists and lawmakers should focus their efforts to combat climate change via artificially cooling the climate by increasing aerosol concentrations. This is what is known as solar radiation management (SRM), a specific type of geoengineering.

According to a 2013 congressional report : 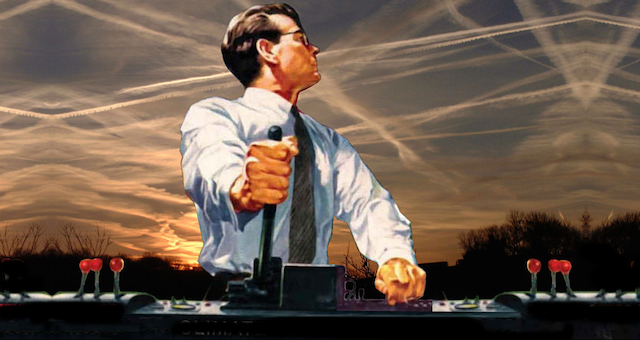 The term ‘geoengineering’ describes this array of technologies that aim, through large-scale and deliberate modifications of the Earth’s energy balance, to reduce temperatures and counteract anthropogenic climate change. Most of these technologies are at the conceptual and research stages, and their effectiveness at reducing global temperatures has yet to be proven. Moreover, very few studies have been published that document the cost, environmental effects, socio-political impacts, and legal implications of geoengineering. If geoengineering technologies were to be deployed, they are expected to have the potential to cause significant transboundary effects.

In general, geoengineering technologies are categorized as either a carbon dioxide removal (CDR) method or a solar radiation management (SRM) (or albedo-modification)method. CDR methods address the warming effects of greenhouse gases by removing carbon dioxide (CO2) from the atmosphere. CDR methods include ocean fertilization, and carbon capture and sequestration. SRM methods address climate change by increasing the reflectivity of the Earth’s atmosphere or surface.

Aerosol injection and space-based reflectors are examples of SRM methods. SRM methods do not remove greenhouse gases from the atmosphere, but can be deployed faster with relatively immediate global cooling results compared to CDR methods.

Now a new analysis released by the Finnish Meteorological Institute is raising more questions about the effectiveness of the controversial science of geoengineering. The FMI is the government agency responsible for reporting weather data and forecasts in Finland. The Institute’s study, “ Modelling radiative and climate effects of aerosols: from Anthropogenic emissions to geoengineering ,” examined the potential for SRM to combat climate change.

The study specifically looked at two types of SRM. The first involved marine aerosol concentrations use to increase clouds, while the second looked at increasing the amount of sulphur concentrated in the stratosphere. The researchers stated that their key objectives were to “investigate the potential of aerosols to cool the climate at the global scale, and identify the possible limits in the effectiveness of the Solar Radiation Management techniques as well as the risks related to these techniques.”

The researchers found that the geoengineering techniques which were studied do in fact have the potential to cool the climate and slow down warming. “However, the cooling effect has limitations,” the team writes.

“The cooling effect attributable to aerosols would be rather small due to the geographical change in tropospheric aerosol emissions or change in energy production studied here when compared to the warming due to the increased greenhouse gas emissions,” the paper states. In other words, the effort, money, and time it would take to invest and create geoengineering methods would likely do very little to actually limit the amount of greenhouse gas emissions.

The researchers even state that based on their models if the world replaced coal with nuclear power for energy production it would lead to a “temporal cooling effect,” but after several years “the warming effect from simultaneously increased GHG emission would exceed the cooling effect.” Also, the cooling that does result from an increase in aerosols is “often achieved at the cost of air quality” which could “lead to an increase in premature mortality.”

The researchers do believe these problems could be mitigated by “reducing (aerosol) emissions from near to the coastal area but increasing it in the open sea.” They suggest “injecting aerosols into the stratosphere and tropics where solar radiation is on average at its largest.”

The FMI also looked at stratospheric sulphur geoengineering, the process of injecting sulphur into the stratosphere in an attempt to recreate a volcano eruption, which has been found to cool the climate. However, even this method is not without problems. The process requires an ever increasing amount of sulphur to be sprayed, which “would result in the formation of larger and larger particles and the aerosol shield would scatter radiation back to space less reflectively.”

Overall, this work demonstrates that aerosols have the potential to cool the climate but slowing down the global warming would require large scale actions aimed at climate cooling. However, these actions include many uncertainties and risks which will need to be studied in detail. This requires simulations by global climate models and aerosol microphysics. If SRM methods are ever used, this would require a simultaneous reduction of GHG emissions and the methods cannot be viewed as a substitute for the mitigation policies.

The new study goes hand and hand with research published by the Finnish Meteorological Institute in 2012 which also found that sulphur injection was not an effective strategy. That study specifically found that using commercial aircraft to spray aerosol into the stratosphere “is not a viable strategy’.

“Using commercial aircraft for sulphur injection would demand unrealistic scenarios to cause significant radiative forcing and thus cooling,” Anton Laakso of the Finnish Meteorological Institute told Environmental Research Web at the time of the study .

Interestingly enough, the idea that aerosols could be sprayed from planes is eerily reminiscent of various conspiracies involving the government using weather control technology to manipulate world events. In fact, Anti-Media recently reported on Professor Alan Robock’s theory that the Central Intelligence Agency is using the weather as a weapon of war.

Regardless of where you stand, geoengineering has been a controversial topic in recent years, both as a subject of conspiracy research and environmental concerns. One of the reasons the topic is so controversial is because of the possible risks. At least one previous study has found that geoengineering could cause the white haze and loss of blue skies that Long is observing. According to a report by the New Scientist , Ben Kravitz of the Carnegie Institution for Science has shown that releasing sulphate aerosols high in the atmosphere would scatter sunlight into the atmosphere. He says this could decrease the amount of sunlight that hits the ground by 20%, as well as make the sky appear more hazy.

Ironically, the promotion of geoengineering might actually cause more harm than good, including an increase in droughts. In February 2015, an international committee of scientists released a report stating that geoengineering techniques are not a viable alternative to reducing greenhouse gas emissions to combat the effects of climate change. The committee report called for further research and understanding of various geoengineering techniques, including carbon dioxide removal schemes and solar-radiation management before implementation.

The scientists found that SRM techniques are likely to present “serious known and possible unknown environmental, social, and political risks, including the possibility of being deployed unilaterally.” The report was sponsored by the National Academy of Sciences, the U.S. intelligence community, NASA, National Oceanic and Atmospheric Administration, and the U.S. Department of Energy.

According to a 2013 study published in the Journal of Geophysical Research: Atmospheres, if geoengineering programs were started and then suddenly halted, the planet could see an immediate rise in temperatures, particularly over land. The study, titled, “The Impact of Abrupt Suspension of Solar Radiation Management,” seems to indicate that once geoengineering begins, the programs cannot be suspended without causing the very problem the engineering was intended to solve.

What are your thoughts? Do you think the U.S. government should study geoengineering ? Are the programs already active? Should humanity pursue the technology?

Derrick Broze is an investigative journalist and liberty activist. He is the Lead Investigative Reporter for ActivistPost.com and the founder of the TheConsciousResistance.com . Follow him on Twitter . Derrick is available for interviews.