The Return Of The Anunnaki

by RE
in Anunnaki, Knowledge
0

The Anunnaki are believed to be the creators of Man. These mighty Gods left Earth in the distant past, saying that one day, they shall return to Earth. Curiously, if we look at ancient cultures around the globe, most of their Gods—Creator Gods—left Earth and promised to return one day.

According to certain researchers and authors, the Anunnaki are due to return to Earth in order “fix what they had done wrong” in order to accelerate a spiritual awakening and the evolution of human consciousness.

The Anunnaki could be returning to Earth, according to a recent interview with Stan Deyo who said NASA and the Pentagon believe the Annunaki will return with the arrival of the planet Nibiru. 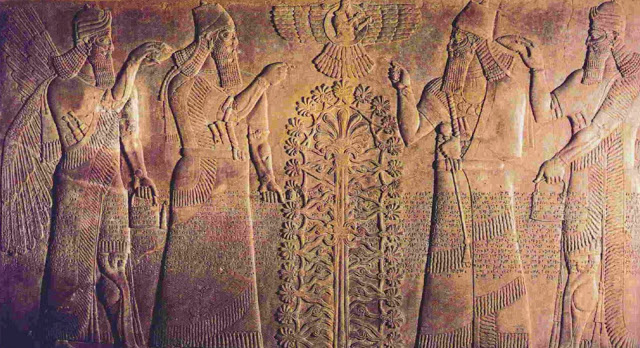 But hold on a minute, aren’t Nibiru, the Anunnaki and all of that stuff nonexistent?

In Sumerian mythology, the Anunnaki were a group of good and evil gods and goddesses who came to Earth and eventually created the human race.

The existence of the ancient Anunnaki –An Extraterrestrial civilization that came to Earth in the distant past–has long been disputed by researchers, yet their existence and arrival to planet Earth is well documented in many ancient texts that mainstream history has completely ignored according to numerous authors around the globe.

Interestingly, there are certain African cultures believe that extraterrestrial beings have been visiting the Earth for tens of thousands of years, for example, the Zulu legends speak of a time when “visitors from the stars” came to excavate gold and other natural resources. These mines were worked by slaves created by the “First People“.

According to some sources and interpretations, these gods came from Nibiru .

The Assyrians and the Babylonians called the planet ‘Marduk’. The Sumerians said that a year on Planet Nibiru (A SAR), is equivalent in time to 3,600 years on Earth.

Nope, Nibiru does not exist you say?

Well, there are numerous indicators that suggest there is a massive planet in the outermost edges of our solar system.

Many would argue that the above suggests a planet like Nibiru can exist.

The Sumerian King List is perhaps one of the most important ancient texts that perfectly describes a time in history where literally ‘Gods’ ruled for thousands of years. ( Find out more about the Ancient Sumerian King List here .)

One of the most interesting details about the Sumerian King List is the fact that the earliest list, describes eight kings who ruled over Earth for a total of 241,200 years, since the original kingship had ‘descended from heaven’ all the way to the time of the ‘Great Flood’, which swept over the land and once more “the kingship was lowered from heaven” after the Flood.

DNA: Evidence of the Gods?

According to researchers from Kazakhstan, “Our hypothesis is that a more advanced extraterrestrial civilization was engaged in creating new life and planting it on various planets. Earth is just one of them.”

The researchers indicate that “What we see in our DNA is a program consisting of two versions, a giant structured code, and a simple or basic code.”

The team of researchers believes for a fact that the first part of our DNA code was not written on Earth and according to them it is verifiable. Secondly and most importantly, genes alone are not enough to explain the evolution/abrupt evolution process and there must be something more in ‘the game’.

According to Makukov “Sooner or later,” “we have to accept the fact that all life on Earth carries the genetic code of our extraterrestrial cousins and that evolution is not what we think it is.”

The implications of these scientific findings reinforce claims by other individuals and observers that claim to have had contact with aliens that look like humans. Human-like aliens could have provided some of the genetic material necessary for human evolution.

Quote from News.Discovery: This interpretation leads them to a farfetched conclusion: that the genetic code, “appears that it was invented outside the solar system already several billion years ago.” This statement endorses the idea of panspermia, the hypothesis that Earth was seeded with interstellar life. It’s certainly a novel and bold approach to galaxy conquest if we imagine this was a deliberate Johnny Appleseed endeavor by super-beings…

According to Gregg Braden—an American author of New Age literature, who wrote about the 2012 phenomenon and became noted for his claim that the magnetic polarity of the earth was about to reverse—we only have 20 of the 64 codons in our “on” DNA. One has to ask, “Why did the Source of creation limit our genetic abilities by turning off most of our DNA?”

One theory is that our DNA was limited by the Anunnaki in order to keep us in submission, control, and conformity with our Anunnaki masters.

Many believe the Anunnaki are those who have been ‘controlling’ us for millions of years, and they know the true genetics of man. Many authors claim that the Anunnaki—who could be the gods mentioned in numerous cultures that promised to return one day— have total control over us since they are the creators of man.

Simon Parkes—a ufo researcher—says we have 12 strands of DNA and each strand is related to a specific galactic race. Hypothetically, if we can find a way to ignite the latent codons in our DNA, we could practically do anything, such as healing every person on the planet instantly, as well as the healing our planet.