A USAF veteran from Ayden, Carolina spotted and filmed a supersonic UFO traveling at 17 times the speed of sound. He filed a report with MUFON, who notified NASA and sent them a copy of the video.

On October 26, the former Air Force member was flying his DJI Phantom 3 Professional 4K drone above Ayden District Park when the unidentified flying object traversed the sky at an unbelievable speed. Its movement was too fast for the naked eye to see but upon playing the video on his 4K TV, the veteran was stunned by what he had caught. 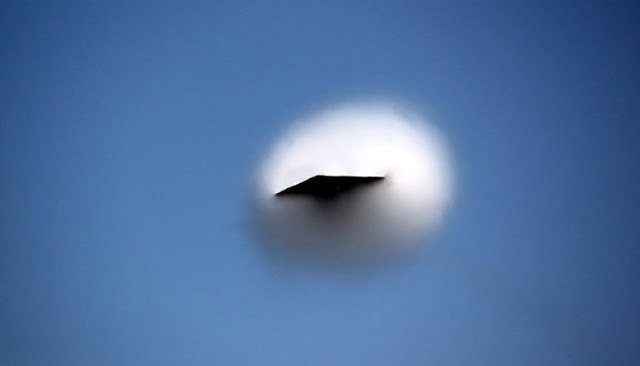 I am 59 years old and retired from the USAF,” the veteran told MUFON. “In my 20 year military career I thought I had seen it all. This footage took me back!”

The enigmatic object was traveling at an altitude of just 50 feet but its speed far exceeds that of any manned craft that we know of. Its velocity was estimated to be up to 13,000 mph, or 17 times faster than the speed of sound.


To put things into perspective, the Lockheed SR-71 only breaks Mach 3.2 or approximately 2,200 miles per hour. The SR-71 holds the record as the fastest manned air-breathing jet and the UFO filmed in Carolina was nearly 6 times faster!

On the other hand, the fastest man-made, unmanned object was HTV-2 (Hypersonic Technology Vehicle 2), a rocket glider built and operated by DARPA as part of their FALCON Project. But while the HTV-2 needs to be launched with a rocket into the stratosphere and only afterwards propelled by its scramjet engine, the UFO filmed by the USAF veteran seems to defy the laws of physics as if it was strolling through the park.

If you play the video at normal speed, blink and you’ll miss it several times. Only when slowed down does the object stay on the screen enough to be seen. According to the YouTube video description, the “UFO traveled 6200 feet (about 1.2 miles) in 1/3rd of a second.”

I filed a UFO report with MUFON and they notified NASA and sent them a copy of the video. The video is under investigation and analysis work is being performed on it by both agencies.”

While the nature of the UFO is yet to be discerned, two details seem to suggest it has a physical body: the object looks metallic and also reflects light. These characteristics rule out any camera glitch as the possible cause.

The veteran’s video was shot in 4K at 30 frames per second and the object appears like a blur in ten of those frames. The distance it manages to cover during that third of a second is simply staggering. Even stranger is the fact that it makes absolutely no sound. Any man-made hypersonic object would roar like a thunderstorm if passing that close to you.

The video was analyzed by MUFON investigator Sanford Davis, who was unable to find a suitable explanation for the sighting.

“This anomaly was neither observed nor experienced first-hand,” he wrote in the official report. “It was observed as the witness was reviewing aerial drone footage. The whole sighting occurs within a third of a second – a streak arising in the background, streaking across the screen before disappearing in the foreground.”

It appears as a white dot, flattening out somewhat into a ‘light disk’ right before it disappears off screen.”

The YouTube comment section is a testament to the fierce deliberation generated by the sighting: some users vehemently claim it has prosaic origins while the others see it as indisputable proof of UFO activity.

Undoubtedly, the results of the NASA analysis will favor the former.